The DOOGEE BL9000 is another member of big-battery smartphones. It has a giant battery with 9000mAh, supports Flash Charging and Qi wireless charging technology. The dual SIM phone is powered by a MTK Helip P23 CPU with up to 2.0GHz, 6GB of RAM and 64GB storage. NFC, Android 8.1 OS and full 4G connectivity are further specifications.

The BL9000 comes with an 18:9 5.99-inch LG screen with full HD+ resolution (1080*2160) and a pixel density of 260ppi. The smartphone incorporates a powerful yet energy-efficient Helio P23 octa-core processor with a clock speed of up to 2 GHz. The chipset is coupled with 6GB RAM and an ARM Mali G71 MP2 GPU with 700MHz. The business style Android phone has an internal storage of 64GB and can be expanded by an additional 128 GB via microSD card.

A great camera is also important for a smartphone these days. The BL9000 adopts a 12-megapixel main rear camera with Sony IMX486 chip, and a secondary 5-megapixel camera for depth of field. The big pixel size of 1.25μm gives you a better color range and excellent low-light images. On the front is an 8.0-megapixel selfie camera and moonlight LED flash light for improved quality of pictures when the light is low.

The cell phone comes with a massive battery with 9.000mAh capacity. The new Doogee model even supports 5V-2A wireless charging which is a great improvement in terms of convenience. The Doogee Flash Charger (5V/5A) is 3 times faster compared to a regular charger. The battery is charged to 30% in merely 10mins and it only takes 70mins to fully charge the smartphone. Other features include Bluetooth, Wi-Fi, OTG, a fingerprint scanner, gyroscope, NFC (Near field communication), GPS, dual SIM and full 4G connectivity. The Android smartphone runs with Android 8.1 Oreo. 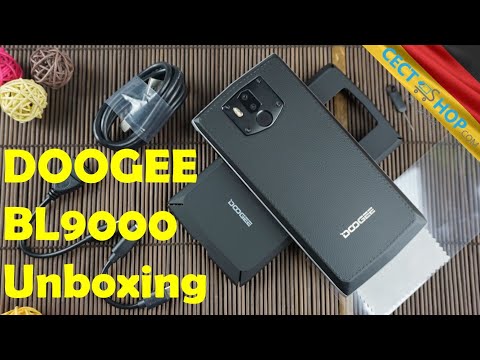