The new Huawei Nova 6-series phones was launched in combination with the new MatePad Pro Android tablet. The Huawei Nova 6 4G is powered by the high-end Kirin 990 chipset. The phone comes with a pill-shaped dual front punch hole camera integrated into the 6.57-inch full HD+ display and a triple rear camera. The built-in battery with 4100mAh can be charged with up to 10V and 4A.

The Huawei Nova 6 4G sports a large 6.57 inches LTPS LCD touchscreen display with a resolution of 1080 x 2400 pixels. The screen supports 16.7 million colors and the smartphone is powered by a HiSilicon Kirin 990 octa-core processor with a burst frequency up to 2.86GHz. The SoC is paired with a Mali-G76 GPU and 8GB of RAM. The Huawei Nova 6 4G has an internal storage of 128GB to offer to save all your games, apps, music, photos and videos.

Coming to the cameras: the Huawei Nova 6 4G has a total of five camera sensors. The triple main camera is a 40-megapixel ultra-sensitive camera with f/1.8 aperture, an 8-megapixel telephoto camera supporting OIS and auto focus, and an 8-megapixel ultra-wide angle sensor. In addition, the Huawei Nova 6 4G comes with a dual punch-hole selfie shooter. There is a 32-megapixel main camera with f/2.0 aperture and a secondary 8-megapixel super wide-angle camera with f/2.2 aperture. The pill-shaped punch hole camera is directly integrated into the display and it is perfect to take selfies, video calls or to unlock the phone via facial recognition. There are a wide variety of different shooting modes including AI beauty, ultra-wide angle, night scene mode, fun AR, portrait mode, panoramic photo, HDR, time-lapse photography, slow motion, continuous shooting, large aperture and more.

The 4G version of the Nova 6 has a slightly smaller 4100mAh battery than its 5G counterpart, but still supports 40W SuperCharge technology. It also has Bluetooth 5.1, dual-band Wi-Fi support, dual-frequency GPS, and reverse wired charging (5V/1A) via OTG. The dual SIM Huawei Nova 6 4G runs EMUI 10 based on Android 10 out of the box. Please note, that even if English language (or another language) is available, some parts of the operating system might still be displayed in Chinese language. 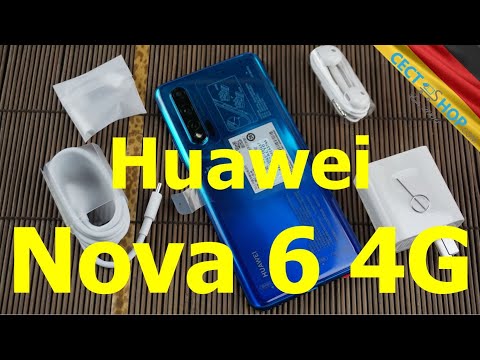