Want us to email you when this item becomes available?

The AGM M7 is an affordable rugged retro phone with a combination of a traditional keypad and a 2.4 inch touchscreen. The AGM M7 is powered by a MediaTek MT6739 processor and runs a simplified version of Android 8.1 OS. The rugged phone comes with 1GB of RAM and an expandable storage of 8GB. Another great retro feature is the removable battery with 2500mAh capacity and a separate microSD memory card slot to expand storage space up to 128GB. The AGM M7 is extremely resistant and IP68, IP69K and MIL-STD-810H certified. Equipped with a powerful sound system, the AGM M7 produces an overall dominant, loud audio experience coupled with a mighty 3.5W speaker on the rear.

You can operate the AGM M7 using its 2.4-inch QVGA touch panel or they keypad. There is also a customizable side key to access an app, play music, access the camera, or activate the LED torch light. Thanks to triple certification, the AGM M7 is shockproof withstanding falls up to 2m on concrete, being soaked in up to 1.5m water for 30 minutes, blocks 99% of dust particles and is capable of being operate within -20°C to 60°C. The extremely durable rubberized phone is powered by a highly efficient 64-bit quad-core chipset that operates up to a fast 1.5GHz with the latest 4G LTE functions and connectivity. The SoC is paired with an IMG GE8100 GPU and 1GB of RAM.

The AGM M7 has two SIM slots and a microSD card slot for cards up to 128GB. The inexpensive rugged phone comes with 4G frequency bands for enhanced connectivity, VoLTE and dual SIM support. Additional connectivity options include 802.11 b/g/n Wi-Fi including hot spot support, Bluetooth 4.2 and a USB 2.0 Type-C port. The AGM M7 comes with a removable 2,500mAh battery behind two layers of casing for extra protection from water ingress. On the rear is a basic camera with 2MP, and the front camera has a 0.3MP sensors for video calls. If you like loud music you will find a massive 3.5W speaker on the back of the AGM M7. Also installed is a powerful LED flashlight on top of the rugged cell phone, as well as FM radio function. The AGM M7 is running a simplified Android 8.1 OS out of the box. 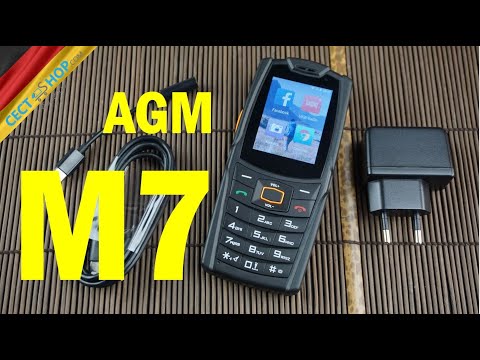