The high-definition display of the BV6800 Pro has a pixel density of 423ppi and is protected by Corning Gorilla Glass 3. The smartphone body is made of soft plastic and metal to withstand though conditions, drops and temperatures. It is IP68 certified and therefore waterproof, dustproof and shockproof. Underneath, the phone is powered by a MTK6750 with 1.5GHz clock speed, 4GB of RAM and an internal storage of 64GB ROM. The internal memory can be additionally expanded by up to 128GB with a micro SD memory card.

On the rear is a dual camera with two 16-megapixel Sony IMX298 camera sensors for taking photos with depth of field. The phone also supports underwater photography. Also located on the back is a dual-tone LED flash and a fingerprint scanner. On the front is an 8-megapixel front-facing camera for selfies and video calls. The outdoor phone can also be unlocked in 0.1s by Face ID.

The Blackview BV6800 Pro is equipped with a 6580mAh big capacity battery which can give you for days of power you can rely on. The BAK battery is charged by ultra-efficient 24W low-temperature fast charging and offers up to 30 days standby. In addition, the BV6800 Pro adopts Qi wireless fast charging with a maximum of 10W. Other features and connectivity options include 802.11a/b/g/n, Bluetooth 4.2, GPS and GLONASS, an electronic compass and a handy toolkit including plumb bob, gradienter or protractor. In terms of 4G connectivity, all important frequencies and bands are supported. The rugged China phone runs Android 8.1 Oreo OS out of the box. 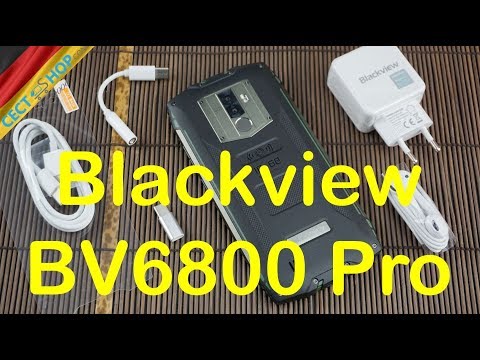