The Blackview BV9500 sports a 5.7-inch FHD+ display with an 18:9 display aspect ratio protected by Gorilla Glass 5. A dual camera setup with 16MP+0.3MP are included on the back of this phone, while a single 13-megapixel camera can be found on the front side. The rugged device packs in 4GB of RAM and 64GB of storage, while it is powered by the MediaTek Helio P23 64-bit octa-core processor. Other flagship features are Qi wireless charging and NFC. The device supports global 4G LTE connectivity. All is fueled by a massive battery with 10,000mAh.

The body is made of soft plastic and rubber to withstand harsh conditions and the 5.7-inch screen (2160*1080p) of the BV9500 is protected by Corning Gorilla Glass 5. It is IP68 certified and therefore waterproof, dustproof and shockproof. Under the hood is an octa-core Helio P23 with a clock speed of up to 2.5GHz. The chipset is supported by an upgraded Mali-G71 MP2 GPU and 4GB of RAM. The on-board storage of 64GB can be expanded by up to 128GB.

BV9500 features an advanced dual-camera system designed to take mobile photography to the next level. It has a 16-megapixel main camera sensor with big f/2.0 aperture, combined with a secondary 0.3-megapixel lens for taking pictures with depth of field. The front-facing camera has a 13-megapixel selfie camera always ready to capture extraordinary moments. Thanks to IP68 certification the rugged phone can even take pictures and videos under water.

The rugged smartphone has a side placed fingerprint recognition to unlock the device in a blink of an eye to protect your personal information. 10 professional sensors make the Blackview BV9500 a true survival phone, including air pressure sensor, electronic compass, GPS and gyroscope sensor. The durable cell phone gets juiced up by a massive 10,000mAh battery supporting Fast Charge technology (12V/2A). It also adopts wireless charging standard. Furthermore, it sports Bluetooth 4.2, Wi-Fi and NFC. In terms of 4G connectivity, all important global frequencies and bands are supported. The rugged phone runs Android 8.1 Oreo OS out of the box.

Order and buy the high-end rugged cell phone Blackview BV9500 online at CECT-Shop.com - your No.1 online-shop for rugged phones since 2006! 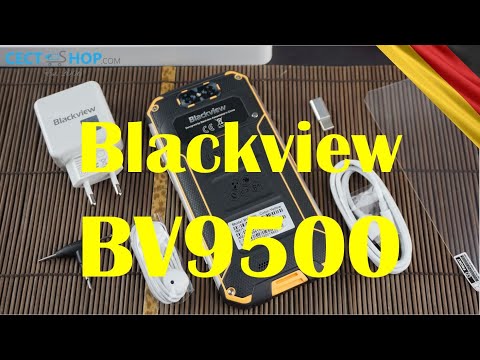