The Doogee S40 is an affordable rugged smartphone with IP68 certification. The durable mobile device comes with Android 9.0, NFC, Facial recognition and a fingerprint scanner. The Doogee S40 is powered by a MTK6739 chipset, 2GB of RAM and has up to 48GB storage to offer. In addition, the rugged phone is not just IP68 rated, but also IP69K and MIL-STD-810G.

The front panel has a size of 5.5 inches. The IPS display shows content with 960*480 pixels (FWVGA) and is additionally covered by Corning Gorilla Glass 4. The pixel density is 195ppi. The rugged cell phone is fueled by a 64bit MediaTek MT6739 quad-core chipset with up to 1.5 GHz burst frequency. The MTK SoC is accompanied by 2GB of RAM and a PowerVR GE8100 GPU. 16GB of ROM can be further expanded with a microSD card.

The inexpensive smartphone features also NFC, a fingerprint sensor on the rear, Wi-Fi, Bluetooth, GPS and Glonass. A built-in battery with 4650mAh capacity offers users a standby time of up to 21 days (505 hours). The S40 supports also 3G and 4G LTE connectivity, FM radio, OTG and keeps running on Android OS v9.0 Pie out of the box. 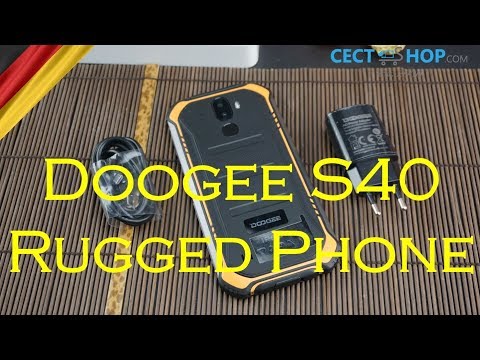