The Doogee S55 is a new member of the rugged S-series. The smartphone brings IP68 standard to eliminate your unease with military grade configuration. It is waterproof and dustproof and packs a massive battery with 5,500mAh. The 5.5-inch cell phone is powered by a MTK6750T octa-core SoC and 4GB of RAM. Thanks to a dual SIM hybrid, the internal storage of 64GB can be expanded to 192GB. On the rear is a set of dual camera sensors and the front-facing camera can be used to unlock the rugged phone with facial recognition. Full 4G connectivity, including band 20 with 800MHz, round up the great package.

The shockproof smartphone sports a HD+ display with a resolution of 1440 x 720 pixels and 292ppi. In terms of performance, the Doogee S55 packs an octa-core 64bit MediaTek MT6750T chipset with up to 1.5GHz clock speed, coupled with a MaliT860-MP2 GPU. The chipset is supported by 4GB of memory and the internal storage of 64GB can be further expanded by up to 128GB via TF card.

The Doogee S55 smartphone features dual Samsung 13-megapixel and 8-megapixel camera sensors, a dual LED flash and phase detection autofocus (PDAF) with an aperture of f/2.2. On the front side is a selfie shooter with 8-megapixel, with an aperture of f/2.2 and automatic beauty mode and 80° wide angle lens. The front-facing camera is used, in addition to the traditional fingerprint scanner, to unlock the sturdy smartphone with face ID.

Powering the Doogee S55 is a 5500mAh non-removable battery with fast charging technology with 5V/2A. The battery offers up to 700 hours of standby time. Talking about connectivity, all basic frequencies and bands are supported, including 4G LTE. Naturally, the smartphone supports Wi-Fi, Bluetooth, GPS, Glonass and a compass. A set of different sensor, e.g. gyroscope and geomagnetism are on board as well. The outdoor Android smartphone is running Android 8.0 Oreo OS out of the box. 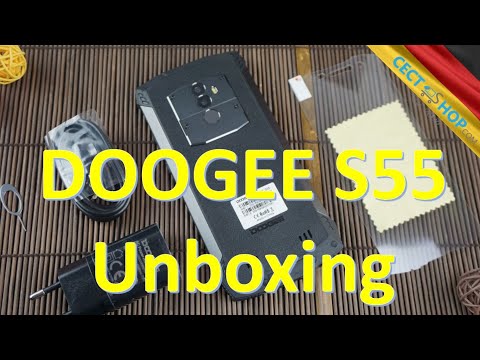