The Doogee S80 is an innovative rugged phone with flagship features and a giant battery with 10800mAh. The Doogee S80 rugged phone comes with a screen size of 5.99-inch. The durable phone is powered by a Helio P23, 6GB of RAM and 64GB on-board storage. It has a 12MP+5MP dual camera on the rear and a 16MP Samsung camera on the front. Besides the advantage that the smartphone has an IP68 waterproof, dustproof and shockproof case, what attracts the most users, there is a Walkie-Talkie in the Doogee S80. The mobile phone also supports all important 4G LTE frequencies including band 20 with 800MHz. Moreover, NFC, Qi Wireless charging and Fast Charging are also supported.

The body of the Doogee S80 rugged phone is made of high-quality plastic corner edges, aluminium alloy frame, a screen with suspending border and leather-grain. It is IP68/IP69K certified and therefore waterproof, dustproof and shockproof. The 5.99 inch IPS display with full HD+ (1080 x 2160 pixels) resolution is protected by Corning Gorilla Glass 4 from scratches, falls and other impacts. Underneath, the phone is powered by an octa-core MediaTek Helio P23 with up to 2.5GHz burst frequency. The SoC is accompanied by 6 GB of RAM and an ARM Mali G71 MP2 GPU.
On the rear of the Doogee S80 is a 12-megapixel and 5-megapixel dual rear camera with dual PDAF and dual LED flash. On the front you can look forward to a 16-megapixel selfie camera with f/2.0 aperture and 80° wide angle. Furthermore, the smart phone supports NFC (Near Field Communication) to pay with Android or Google Pay, Qi wireless charging, dual SIM and full 4G connectivity. The battery has an enormous capacity of 10.800mAh offering up to 1380 hours of standby time. The Doogee S80 runs Android 8.1 Oreo out of the box.
Order and buy the extremely robust Doogee S80 rugged phone at an unbeatable low price! Get the Doogee phone today at CECT-Shop.com. 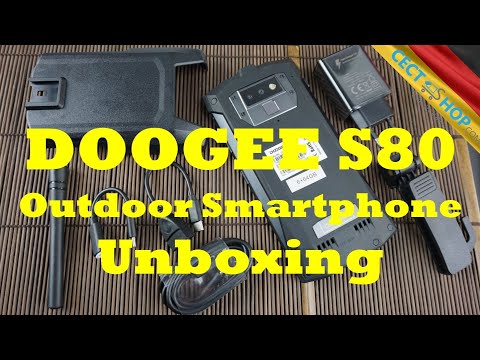