The Doogee S88 Pro rugged phone is a perfect smartphone for adventurous people or users who are working outdoors or in extreme conditions. The S88 Pro is packed with great hardware and features including a massive 10,000mAh battery, Qi wireless charging, LED multi-function light, IP rating, 2 available customized keys or a survival software pack. The Doogee S88 Pro comes with the powerful Helio P70 octa-core processor and sports a 20:9 display with full HD+ resolution. Thanks to 128GB storage space available, you can store up to 420 episodes of your favorite TV series or 80 games on the phone with the option to further expand by an additional 256GB. The huge battery offers a standby time up to 32 days!

The indestructible Doogee S88 Pro has a large 6.3-inch waterdrop display with 1080 x 2340 pixels resolution, a pixel density of 410ppi and an additional Corning Gorilla Glass protection against scratches and other daily influences. The rugged phone is IP69K and IP68 certified and resistant to damage from dropping, water immersion, shock or impact. The S88 Pro is powered by a MediaTek Helio P70 chipset. The Helio P70 (MT6771) has eight cores with a maximum clock speed of 2.0GHz. The processor is coupled with 6GB of RAM and an ARM Mali-G72 MP2. For saving apps, photos, music and videos, the S88 Pro offers an expandable storage of 128GB. The storage can be further expanded by up to 256GB.

The affordable Android rugged smartphone offers a total of four camera sensors. On the rear is a triple camera setup with 21-megapixel main camera and PDAF support. The Sony IMX230 sensor is accompanied by an 8-megapixel wide angle lens and an 8-megapixel portrait sensor. The CMOS sensor will keep fast-moving subjects sharp and also integrated HDR and 4K video shooting. On the front is a 16-megapixel Samsung selfie camera with 80° FOV and f/2.0 aperture.

The built-in battery is one of the major highlights of the S88 Pro. The battery has a super large capacity of 10000mAh. The S88 Pro is a little charging station in itself being able to reverse wireless charge other devices with an output of 5W. The Doogee rugged phone can be also charged by Qi Wireless Charging with up to 10W. In addition, the smartphone supports NFC (Near Field Communication) to pay with Android Pay or Google Pay, dual SIM and full 4G connectivity. For precise navigation four different satellite systems provide a fast and stable navigation. The Doogee S88 Pro runs Stock Android 10 OS out of the box. 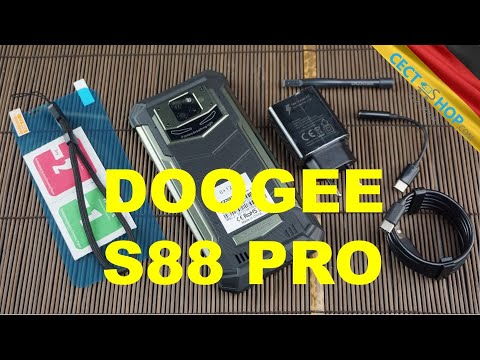