The Doogee X70 is a budget smartphone that has all you want and need. It looks similar to an iPhone X but comes for a budget price. It sports a 5.5-inch qHD+ display and is powered by an entry-level quad-core chipset, 2GB of RAM and up to 144GB of storage. The Doogee X70 packs a massive 4,000mAh battery and up to 3G connectivity.

The Doogee X70 has a 5.5-inch 2.5D display used to display all your information. To reduce the energy consumption, the resolution is 540 x 1132 pixels, with an aspect ratio of 19:9 and 232ppi. Underneath the multi-touch touchpanel is a MediaTek MT6580 quad-core processor with a burst frequency of 1.3GHz. The SoC comes coupled with 2GB of RAM and an ARM Mali-400 MP2 GPU with 500MHz. The on-board storage of 16GB can be further expanded by up to 128GB.

On the rear of the low-cost iPhone X replica is a dual camera setup with 8MP + 5MP, LED flash, f/2.2 aperture and up to 720p video recording. On the front is a selfie camera with 5MP. The front-facing camera is also used to unlock the X70 with facial recognition. In addition, it has a fingerprint sensor. Therefore, the smartphone offers two recognition ways, your unique face and fingerprint.

The Doogee X70 smartphone has a large 4000mAh battery. In terms of connectivity it features Bluetooth, Wi-Fi, 2G and 3G and a microUSB port. The U-notch phone comes with Android 8.1 Oreo OS.

Get the budget-friendly Doogee X70 now online at CECT-Shop.com. Your #1 online store for China Phones since 2006. 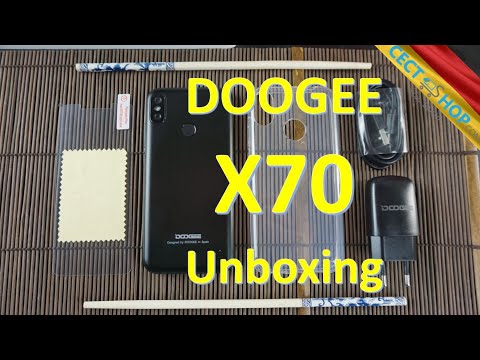