The U Pro is the first Elephone smartphone to use a high-end Qualcomm processor. It is equipped with a Snapdragon 660 SoC. The Elephone U Pro, formerly known as Elephone S9, looks exactly like the Elephone U. It comes with a 3D glass back and a 5.99-inch AMOLED screen with Full HD+ resolution. The phone comes with either 4+64GB or 6+128GB and is running Android 8.0 Oreo out of the box.

The curved touchscreen of the Elephone U Pro looks similar to one of the Samsung Galaxy S phones. The mobile has a curved 2.5D 5.99-inch AMOLED display with a resolution of 1080x2160-pixels (403ppi). In addition, the screen is protected by Corning Gorilla Glass 5 and supports 10-point multi touch. The Elephone U Pro is powered by a 64bit Qualcomm Snapdragon 660 octa-core processor with a maximum clock speed of 2.2GHz with improved performance and power consumption compared to the Snapdragon 653. The device is available in two variants – 4GB RAM and 64GB internal storage, and 6GB RAM and 128GB internal storage. Thanks to a hybrid SIM slot the storage can be further expanded.

The Elephone U Pro is triple camera phone. On the rear is a dual camera with two 13-MP sensors. One is responsible for taking RGB pictures and the other for monochrome. The rear camera supports Phase Detection autofocus (PDAF), Bokeh effect with ArcSoft algorithm and has a dual-tone LED flash. The video recording resolution is 4K with 30fps or 2K with 60fps. On the front is an 8MP front facing camera for selfies and to unlock the phone with your face (FOTA later).

In terms of connectivity, there a minor differences compared to the Elephone U. The dual SIM phone supports connectivity options such as dual band Wi-Fi, Bluetooth 5.0, Qi Wireless Charging and NFC are included. The high-end version packs a 3550mAh battery which should even last longer than the 3620mAh battery of the Elephone U because of the more power efficient Snapdragon SoC. The Elephone U Pro runs Android 8.0 Oreo out of the box.

Now available to order and buy – get the Elephone U Pro now online at CECT-Shop.com. 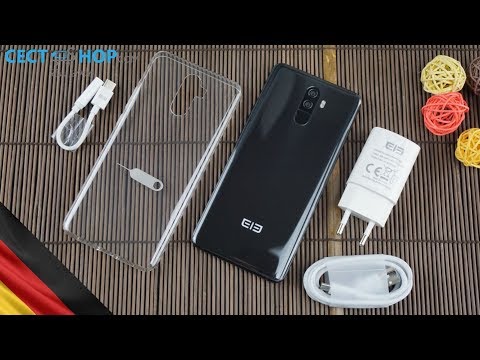