The Huawei Honor 9X is the first phone of Huawei’s sub-brand with a pop-up selfie camera. The Android smartphone features a 6.59-inch FHD+ screen and like the Honor 20 Pro comes with a fingerprint reader on the side. The phone is powered by the new Kirin 810 chipset and up to 8GB RAM. The smartphone packs a large battery with 4000 mAh capacity and supports dual 4G LTE. On the rear it has a stylish 3D looking X-shaped finishing when choosing blue or red color.

On the front, the Huawei Honor 9X features a 6.59-inch full HD+ display with a resolution of 2340x1080 and 391ppi. The display is also certified by German TÜV Rheinland in terms of eye protection. Like the Huawei Nova 5 Pro, the Honor 9X is powered by the company’s second 7nm chipset. The Kirin 810 octa-core processor features 2x Cortex A76 with 2.27GHz and 6x Cortex A55 with 1.88GHz. For graphics, the smartphone is equipped with a Mali G52. The 9X starts with 4GB of RAM and 64GB of internal storage. Further variants are 6GB+64GB, 6GB+128GB and 8GB+128GB. All three models support 512GB expansion with microSD memory card.

The successor of the Honor 8X best-seller has a 48MP + 2MP dual camera setup. The main sensor with 48-meagpixel comes with f/1.8 aperture and a secondary 2-megapixel lens support phase detection (PDAF) and contrast focus. Shooting modes include 3D portrait light effect, 480fps super slow motion video, super night scene and many more. The front-facing camera is hidden inside the body. The mechanic pop-up selfie camera has 16-megapixel (f/2.2) and is not just great for taking pictures but also to have video calls with your family and friends or to unlock the Android phone.

Inside, the Honor 9X sports a 4000mAh battery (5V2A) and is charged via USB-C port. It also has a 3.5mm headphone jack and supports 4G LTE, Bluetooth, dual band Wi-Fi and GPS for navigation purposes. The midrange smartphone can be safely unlocked with a side-mounted fingerprint sensor which also functions as power button. The Honor 9X runs with EMUI 9 based on Android 9 Pie OS out of the box. 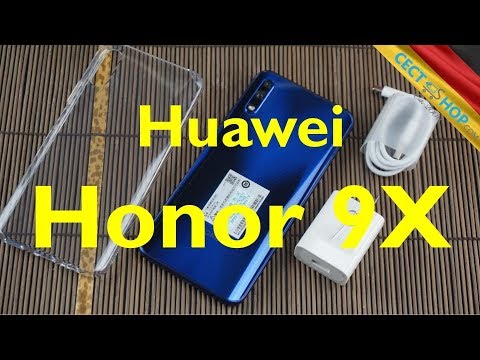