The Honor Magic 3 Pro handset is powered by Qualcomm’s brand new Snapdragon 888 Plus chipset and sports a quad camera array, plus 8x8 dTOF laser focusing sensor. On the front, it is equipped with a 6.67-inch OLED panel supporting up to 120Hz refresh rate. As long as your eyes are the screen, the always-on display will remain on. The rear camera features a 64MP monochrome camera, a 50MP wide-angle lens, a 13MP ultra-wide sensor and a 64MP periscopic telephoto camera, capable of up to 100x digital zooming. The phone has a built-in battery with 4,600mAh capacity supporting 66W wired charging and 50W Qi wireless charging technology. The Honor Magic 3 Pro runs Android 11 with Magic UI 5 skin on top and benefit from IP68 water and dust protection.

Every lens of the Magic 3 Pro is equipped with a large sensor to ensure that every picture is of high quality. The main camera of the Magic 3 Pro has 50 megapixel (Sony IMX766) supporting 23mm focal length and all-pixel and full-range focusing. The 64MP periscope camera comes with 3.5x optical zoom, 10x hybrid lossless zoom and up to 100x digital zoom, OIS and telephoto picture-in-picture support. In addition, the phone has a 13MP autofocusing ultra wide-angle camera and a 64MP black-and-white camera with f/1.8 aperture. The 8x8 dTOF laser focusing sensor of the Magic 3 Pro features a greater depth of field, as well as a wieder, faster and more accurate focusing at night. With the Honor Magic 3 Pro you can record videos like a movie. IMAX has developed a variety of Hollywood-quality 3D LUTs for the Magic 3 series. The 13MP wide-angle front-camera is accompanied by a 3D ToF camera for increased security of the 3D face unlocking system. The dual-front camera also allows you to to wink at the screen to gradually mute the phone.

The Honor Magic 3 Pro supports 66W wired super charging, 50W Qi wireless super charging, and wireless reverse charging to help you charge other devices with the smartphone as a power source. The phone has a battery with 4600mAh capacity and the Magic 3 Pro and Pro+ are the only devices of the Magic 3 series supporting wireless charging. The dual SIM Android phone features Wi-Fi 6, dual 5G, dual 4G, Bluetooth 5.2, and NFC. With the power of dual Wi-Fi and dual cellular network combined, the phone is able to achieve peak download speeds of up to 6.1 GBps. For navigation and positioning you can rely on dual GPS, A-GPS, triple BeiDou and dual Galileo. The Honor Magic 3 Pro is running the latest Magic UI 5 based on Android 11 OS with OTA support. Please note, that even if English language (or another language) is available, some parts of the operating system might still be displayed in Chinese language. No launcher change possible. 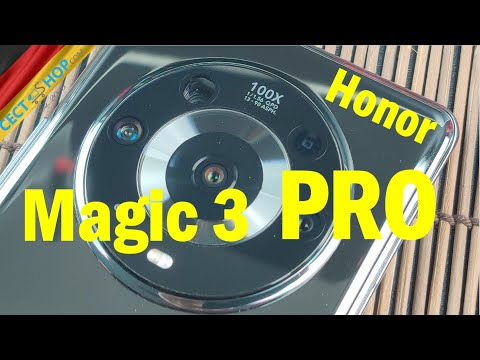