The Huawei Honor Play 3 is a budget Android smartphone to rival the Xiaomi Redmi Note 8. The device comes with a 6.39-inch screen, Kirin 710F octa-core chipset, 4GB or 6GB of RAM and an expandable storage by up to 512GB via microSD memory card. The Honor Play 3 sports a triple-rear camera and a punch-hole selfie shooter integrated into the top left corner. The Honor Play 3 brings GPU Turbo technology, which delivers performance improvements to over two dozen mobile games, including Fortnite and Minecraft. At the same time, it supports GameDock mode, Vulcan mode and Link Turbo network technology.

The new Honor smartphone is equipped with a 6.39-inch HD+ screen (1520 x 720) with TÜV Rheinland certification and 90.15% screen-to-body ratio and 269ppi. The Honor Play 3 sports a HiSilicon Kirin 710F octa-core processor with up to 2.2GHz burst frequency. In addition, the smartphone comes with up to 6GB of RAM and a Mali G51-MP4 GPU for a great gaming and multi-task performance. The cell phone has either 64GB or 128GB expandable storage to offer.

In the camera department, there is a triple camera on the back of the Honor Play 3. The 48-megapixel main camera (f/1.8) is accompanied by a 120° super wide-angle camera with 8-megapixel (f/2.4) and another camera lens with 2-megapixel (f/2.4) for taking pictures with depth of field effect. The 8-megapixel punch-hole selfie camera with f/2.0 aperture on the front is perfect for selfies, video calls and to unlock the inexpensive Android smartphone thanks to AI features. Both, front and rear camera, can record videos with 1080p and 30fps.

The phone is water resistant with IP5x rating. Inside, the Honor Play 3 packs a 4,000mAh battery with 10W charging via microUSB port. Connectivity options include Bluetooth 5.0, 802.11 b/g/n Wi-Fi, OTG and dual 4G LTE. GPS/AGPS, Glonass and Beidou are also supported. As for the software, the entry-level device ships with Android 9 Pie based on EMUI 9.1. Please note, that even if English language (or another language) is available, some parts of the operating system might still be displayed in Chinese language. 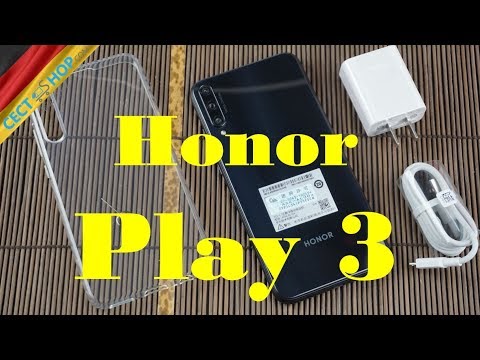