The Huawei Honor 10 is an AI photography Smartphone equipped with a Kirin 970 chipset. It comes with a 5.84 inch IPS Screen and has 6GB of RAM. The internal storage is 64GB or 128GB.  Thanks to discoloration aurora glass the rear of the device in Phantom Blue and Phantom Purple is even able to change the color. The Honor 10 sports a new generation of ultrasonic fingerprint that you can unlock the phone even with wet fingers. The smartphones cameras support a wide variety of AI function, 3D portrait light effect and augmented reality (AR). The 24-megapixel front camera can also be used to unlock the phone by facial recognition. Thanks to Honor Super Charge technology the 3,400mAh battery can be charged up to 50% in less than half an hour.

There are two different versions available with this Huawei Honor 10, you can choose either 6+64GB or 6+128GB. The Huawei Honor 10 sports a trendy 19:9 5.84-inch with a resolution of 2280 × 1080 pixels and it is powered by a 64bit HiSilicon Kirin 970 octa-core chipset with a clock speed of up to 2.36GHz. To support all of the AI features there is an i7 co-processor on board. For great graphic results the SoC is accompanied by the Mali-G72 MP12 GPU.

The Huawei Honor 10 sports an extensive camera array. On the back of the device is a dual camera setup with a 16-megapixel color lens and a 24-megapixel monochrome lens, both with f/1.8 aperture. Videos are recorded with up to 4K. The camera support AI photography, 3D dynamic panorama, HDR, Fun AR and many more modes. The front camera has a 24 MP camera lens for taking great selfies. The front camera can also be used for video calls with Google Duo or Skype. In addition to those features above the phone can also be unlocked via Face ID.

Order the Huawei Honor 10 now – safe and fast online shopping at your No.1 CECT-Shop.com. 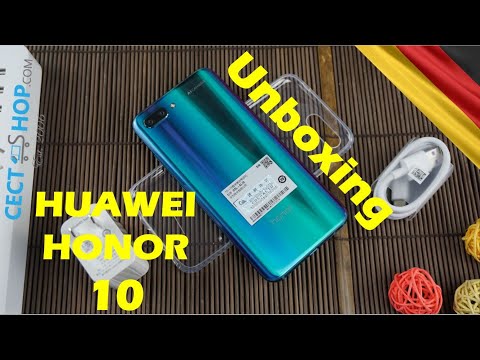