The Huawei Honor 20 Pro comes with a striking Dynamic Holographic finish and features 3D glass which the standard Honor 20 model doesn’t have. In comparison to the Honor 20 the Honor 20 Pro differs in terms of size, battery and camera sensors. The Honor 20 Pro packs a HiAI Kirin 980, in combination with dual NPU and a Mali-G76 graphics processor. The smartphone is available with 8GB+128GB and 8GB+256GB and sports a 4000mAh battery.

In the camera department, the Honor 20 Pro to packs a wide angle lens, a 30x zoom feature, macro shots as close as 4cm, and a DxOMark of 111. It comes with the same 16-megapixel super wide-angle sensor with a 117-degree field of view and an f/2.2 aperture and a 2-megapixel macro lens with the ability to capture objects 4cm from the lens like the Honor 20. Where they differ, is the 8MP telephoto sensor with 3x optical zoom and the 48-megapixel main sensor with f/1.4 instead of f/1.8 aperture. On the front sits a punch-hole selfie camera with 32MP high-resolution integrated into the display. The front camera intelligently combines four pixels into one large pixel for clearer selfies than ever before.

The Huawei Honor 20 Pro has a side-mounted power button with integrated fingerprint sensor. The smartphone is equipped with a 4000mAh battery supporting 22.5W Honor SuperCharge technology. The Honor 20 Pro features also a wide range of connectivity options including dual band Wi-Fi, Bluetooth 5.0, NFC, dual 4G LTE, VoLTE, and dual GPS, dual Galileo as well as dual QZSS for navigation. For audio fans an all-new virtual 9.1 surround sound was created based on the principle of how sound waves travel and interact with human eardrums. With the Huawei Honor 20 Pro you immerse yourself in a world of sound like never before. The high-end quad-camera phone is running Magic UI 2.1.0 based on Android 9 Pie OS. Please note, that even if English language (or another language) is available, some parts of the operating system might still be displayed in Chinese language.

Order and buy the Huawei Honor 20 Pro at the best online shop for Huawei smartphones, tablets and gadgets – CECT-Shop.com. 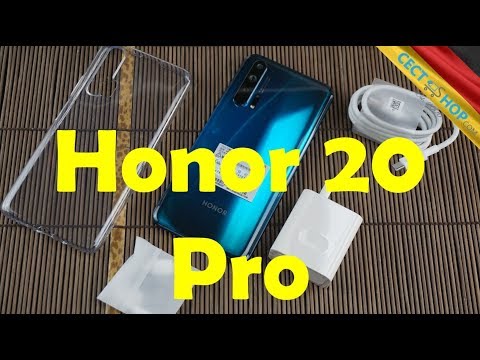