The Huawei Honor Play 4T sports a punch-hole display with dual camera on the rear which has artificial intelligence (AI) backed features to offer. The affordable phone is equipped with the brand new HiSilicon Kirin 710A processor with eight cores and 6GB of RAM. The Honor Play 4T has a 6.39-inches screen and packs a non-removable 4000mAh battery. The dual SIM phone with triple card slot supports 4G LTE connectivity among others.

For photos and videos, there is a dual camera setup on the rear of the Honor Play 4T includes a 48-megapixel main sensor and a secondary 2-megapixel camera lens. The camera supports different modes including Portrait mode, Panorama, HDR or Super Night Scene. The 8-megapixel selfie shooter is integrated into the display and supports taking photos with a maximum resolution of 3264 x 2448 pixels. Besides selfies, the front-facing camera can be used for video calls or to unlock the Android phone with facial recognition.

The Huawei Honor Play 4T packs a 4,000mAh battery that supports 10W fast charging via its micro USB port. The phone has a standby time up to 17 days. The mobile phone supports connectivity options including dual 4G LTE, Wi-Fi 802.11 b/g/n, Bluetooth 5.0, GPS/ A-GPS, and a 3.5mm headphone jack. Sensors on board of the Honor Play 4T are an accelerometer, ambient light, and a rear-mounted fingerprint reader to unlock the device. The Android phone is running Magic UI based on Android OS. Please note, that even if English language (or another language) is available, some parts of the operating system might still be displayed in Chinese language. No launcher change possible. 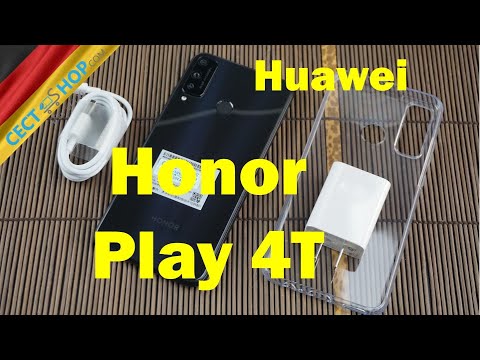