Lenovo is back with the Legion Pro Gaming Phone! The Lenovo Legion Pro is the China version of the Legion Duel and the phone is equipped with the most powerful processor of 2020, the Snapdragon 865 Plus with 3.1GHz and up to 12GB DDR5 RAM. The dual cell battery with a total capacity of 5000mAh is charged using two USB Type-C ports from zero to 50% in just 10 minutes. The mobile phone scored up to 648871 on Antutu.

The screen of the Lenovo Legion Pro has a 144Hz refresh rate with 240ms response time. The touch panel comes with a resolution of 2340 x 1080 pixels and spans over 6.65-inches. Under the hood, the Qualcomm Snapdragon 865+ octa-core processor is transforming the Legion Phone Duel into one beast of a phone. The eight core chipset has a maximum burst frequency of 3.1 GHz and is coupled with an Adreno 650 GPU and DDR5 memory. The phone, which is branded with the company's gaming line Legion, offers up to 512GB UFS3.1 storage capacity to save all your 3D shooters and games.

The dual rear camera is located around the centered glowing Legion "Y" logo on the back. The Lenovo Legion Pro packs a 64-megapixel main camera and a 16-megapixel secondary lens. The front-facing camera is a pop-up camera on the side of the gaming phone so you are able to unlock the phone, take selfies or have a live feed of yourself while playing games online and streaming in horizontal mode.

The high-end gaming phone packs two separate batteries each with 2500mAh capacity which allows the Legion Pro to be charged with high-speed never seen before. The gaming device has two USB-C ports and can be charged from zero to 50% in 10 minutes or up to 100% within 30 minutes. To stay cool during heated battle sessions, the Lenovo Legion Pro is equipped with a state-of-the-art dual liquid-cooling system and copper tubes for heat dissipation. The divided batteries and their positions also help to extend battery and usage life and to keep the temperature of the mobile phone down. The built-in NFC chip can be used for mobile payments (original firmware only). The phones Hyper Audio features include two large 0.65mm amplitude speakers, four noise-cancelling microphones, and DHS (deep howling suppression) function. Please note, that even if English language (or another language) is available, some parts of the operating system might still be displayed in Chinese language. No launcher change possible.

Stylish outside, savage inside: Order and buy Lenovo Legion Pro (L79031) aka Legion Phone Duel online at CECT-Shop.com - your #1 online store for gaming phones since 2006! 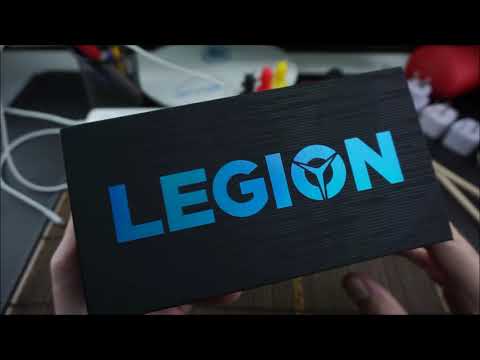