The Lenovo Z5 Pro GT is the first smartphone to hit the market with the Qualcomm Snapdragon 855 processor. The Z5 Pro GT will also be the first device to launch with up to 12GB of RAM. This makes the Z5 Pro GT the most powerful Android phone on the market. The phone will launch first in three variants – 6GB+128GB, 8GB+128GB and 8GB+256GB. The slider phone has the same dimensions and design elements of the Z5 Pro but with a much more potent hardware on board. It sports a Super AMOLED display with 6.39-inch and the phone offers a screen-to-body ratio of 95.06 percent. Additional highlights include an under-display fingerprint sensor, NFC and a quad-camera setup. The carbon black color mimics the OnePlus 6T McLaren Edition’s carbon fiber back.

The all-screen slider phone Z5 Pro GT features a get a 6.39-inch 2,340 x 1,080 AMOLED display. The phone is powered by the latest system-on-chip Snapdragon 855 from Qualcomm. The chipset is fabricated on a 7nm process and will offer you speed with unimaginable performance and power efficiency. The burst frequency of the octa-core CPU is up to 2.84 GHz and is paired with an Adreno 640 GPU. There is a memory of up to 8GB of RAM and up to 256GB of internal storage available.

The Lenovo Z5 Pro GT has a total of four camera sensors on board. Lenovo opted to hide the dual front-facing camera behind a sliding front screen like the Xiaomi Mi Mix 3 or Huawei Honor Magic 2. On the rear is a dual camera setup with a 16-megapixel main sensor and a 24-megapixel secondary 4-in-1 camera lens, supporting auto focus, dual color LED flash and f/1.8 aperture. Available camera modes include HDR, super night scene, or continuous shooting. The front-facing camera comprises a 16-megapixel and an 8-megapixel sensor combination with f/2.2 aperture. In addition, the front cameras include infrared-powered facial recognition to unlock the Android phone.

Order and buy the first phone with Snapdragon 855 SoC now online at CECT-Shop.com. 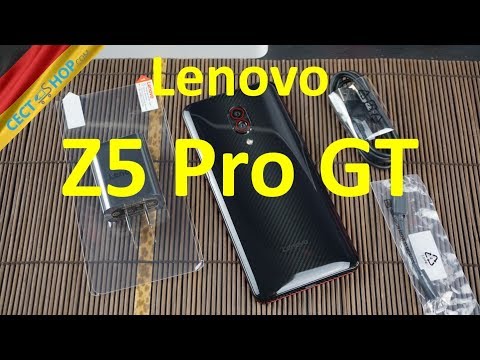