Meizu is celebrating their 15th anniversary and therefore the new flagship of the year 2018 is not the Meizu Pro 8 Plus, but the Meizu 15 Plus. The new 15-series reflects their fundamentals including components of the highest quality, a stunning design, and a pursuit of perfection. The 5.95-inch phone comes with very narrow bezels and a Super AMOLED display with a super sharp resolution of 2560 x 1440-pixels. Like its smaller brother, Meizu 15, the Plus version has a body made of surgical stainless steel and aluminum alloy for great haptics. Certainly, facial recognition is also supported as well as touch ID. The Meizu 15 Plus is powered by a Samsung Exynos chipset and 6GB of RAM. The large battery with 3,500mAh capacity is charged with the new Thanks to mCharge 4.0 technology in no time. The high-end device runs the brand new Flyme 7 UI with upgraded One Mind AI system.

The large edge-to-edge Super AMOLED screen is custom-made from Samsung and has a size of 5.95-inch and a brilliant resolution of 2560 x 1440 pixels (WQHD). The 15 Plus comes with a total new experience to unlock and use the phone is provided by the built-in haptic engine called mEngine. As physical buttons are disappearing more and more Meizu has made an approach to improve virtual buttons which simulate the feeling of using a physical button. The Exynos 8895 processor has eight cores and a maximum clock speed of 2.3GHz. The SoC provides more than enough power to push through the most intensive tasks and games. The graphics unit on board the Meizu 15Plus is a Mali-G71. The 15 Plus-series is available with 6 GB RAM and either 64GB or 128GB of internal storage.

Like the smaller Meizu 15 is sports the same high quality camera components. On the rear is a 12-megapixe + 20-megapixel dual camera with wide-angle lens and long-focus lens. The Sony IMX380 features OIS, 1.55μm large pixels, a wide f/1.8 aperture, multi-frame noise reduction, HDR and a LED flash light ring with 6 LEDs. On the front is an AI-powered selfie shooter with 20-megapixel that helps to improve pictures based on age, gender, and various other factors. The selfie camera also supports facial recognition to unlock the phone via Face ID.

The large 3500mAh battery of the Meizu 15 Plus is charged with mCharge technology (24W). The high-end smartphone comes with dual stereo speaker which delivers a great sound experience while watching a movie or playing a game. Further features include dual band Wi-Fi (802.11 ac/b/g/n), Bluetooth 4.2/BLE and for positioning GPS, GLONASS, Beidou, Galileo, SBAS, QZSS, as well as a compass. The Meizu 15 Plus is running with the new Flyme 7 UI which features over 300 new functions and 1,300 optimizations.

Get ready for the new Meizu 15 Plus – available only at CECT-Shop.com! 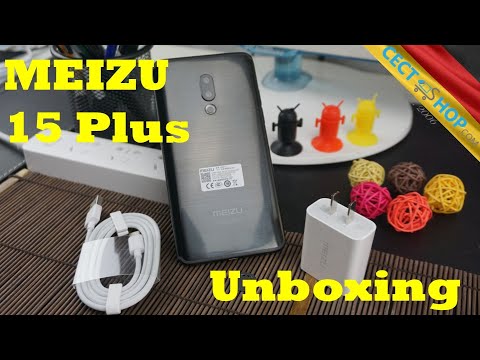