Nubia, a sub-brand of ZTE, has launched the Red Devil (or Magic Devil and Red Magic) phone and it’s built for gaming. The Nubia Red Devil is a smartphone for every extreme gamer and the “gaming” device is competing the Razer Phone and Xiaomi Black Shark. The smartphone is powered by Qualcomm‘s Snapdragon 835 along with up to 8GB RAM. The high-end chipset is accompanied by a built-in fan cooling system. The device features a red hardware button switching directly to “gaming mode”. The Red Devil has a premium-looking design with a black or red body made of metal and carbon nano-material, three-dimensional wind tunnel section structure, a LED strip on the back and cutouts for the speaker and cooling system.

Camera-wise, there’s a 6-pieces camera lens with 24-megapixel rear camera and f/1.7 aperture on the rear. On the front is an 8-megapixel front-facing lens with f/2.0 and 76.9° wide angle. As usual with Nubia phones NeoVision 7.0 comes pre-installed too. Between the main camera and the LED stripe is a fingerprint scanner to safely unlock the device.

The built-in battery is charged by USB Type-C and has a capacity of 3,800mAh. In terms of connectivity 4G FDD-LTE with B1/B3/B5/B7/B8 and B20 are supported. The phone comes with a 3.5mm headphone jack and sports a TAS2555 chipset and DTS sound. Other features include dual band Wi-Fi, Bluetooth 5.0 + BLE, GPS, GLONASS, BeiDou and an electronic compass. The Nubia gaming phone runs Nubia Red Magic OS, based on Android 8.1 Oreo. 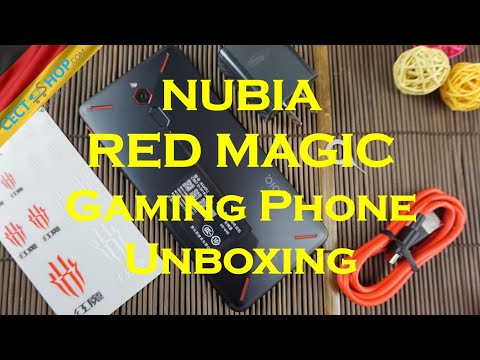