The Nubia Red Magic 6S Pro comes with a new Transparent Design and is powered by the Qualcomm Snapdragon 888 Plus flagship chipset. With a 165Hz refresh rate, the 6.8 inch AMOLED screen delivers beautiful FHD+ visuals at up to 165 frames per second. Take full control and advantage of those speeds with the 720Hz multi-finger touch sampling rate of the Red Magic 6S Pro gaming beast. The cooling system of the smartphone also received an upgrade with new aerospace-grade phase change materials (PCM) that changes the way to cool off the phone to keep it comfortable and cool. The heat is stored in the new material instead of leaking out of the phone into your hands. The Transparent version features a RGB lighting fan with an increased air flow and 40% noise reduction. The Red Magic 6S Pro offers DDR5 RAM, UFS 3.1 storage and 120W Fast Charge technology. The Tencent branded gaming phone supports 4G LTE with band 20 (B20) and band 28 (B28), as well as high-speed dual 5G connectivity.

The 165Hz refresh rate gaming screen of the Red Magic 6S Pro supports 8-bit color depth, DCI-P3 100% color gamut and SGS Eye Care certification. Integrated into the Super AMOLED panel with 1080*2400 pixel resolution is an ultra-thin optical under screen fingerprint sensor. With up to 720Hz multi-finger touch sampling rate you are always one step ahead. The gaming phone also comes with shoulder trigger buttons and a new sliding trigger on the rear. Under the hood, it is powered by the most powerful 64bit Qualcomm Snapdragon 888 Plus processor, paired with Adreno 660 GPU and up to 12GB DDR5 of RAM. Thanks to Magic GPU 1.0 frame rate stability was improved by 60%. The Nubia Red Magic 6S Pro offers 128GB or 256GB UFS 3.1 storage space for your 3D shooters, racing games and other addictive mobile games you love to play.

On the rear of the Red Magic 6S Pro is not just the RGB lighting fan and sliding trigger, but also a triple camera setup with 64 megapixel main camera (S5KGW3). In addition, there is an 8 megapixel ultra wide-angle camera (HI846) with 120° FOV and a third 2 megapixel lens (OV02A10). The rear camera supports video recordings with up to 8K resolution at 30fps and slow-motion captures with 1080@240fps or 720p@480fps. The 8 megapixel front-facing camera has an aperture of f/2.0 and 1.12μm pixel size supporting video shooting with up to 1080p at 30fps. The selfie shooter is perfect for live mobile gaming streaming on Twitch, YouTube Gaming or Facebook Gaming.

Compared to the Global version of the Nubia Red Magic 6S Pro the China version packs a smaller battery with 4,500mAh capacity, but supports 120W Flash Fast Charge instead of only 66W Quick Charging via USB Type-C port. Using 120W Flash Fast Charge technology allows you to fully charge the Red Magic 6S Pro in 17 minutes. The high-end gaming phone is dual 5G-enabled, 4G LTE with 800MHz (band 20) and has Bluetooth 5.2 connectivity. In the sound department, it boasts dual smartPA stereo speakers with DTS X Ultra support. Red Magic screen cast allows you to transform your phone into a host in seconds. Project the screen to the display device you want to project, with almost zero delay, supporting up to 165Hz high frame rate screen projection, at any time to bring professional e-sports experience to the big screen. The Nubia Red Magic 6S Pro gaming phone runs Android 11-based Red Magic OS 4.5. Please note: Apps on the phone will be shown in the selected language. But even if your desired language is supported RedMagic OS if not fully translated into any language besides English and Chinese. 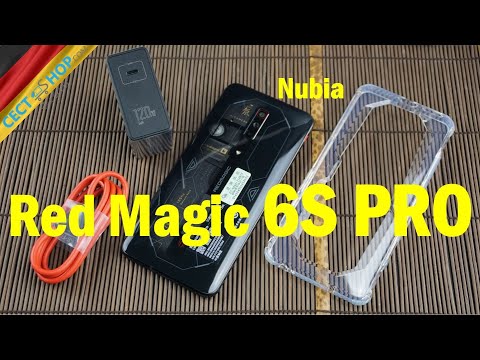