The McLaren Edition of the OnePlus 7T Pro is the company's flagship smartphone for 2019. The smartphone packs the highest specifications and features of any OnePlus phone and comes with special design elements and a unique packaging. The limited edition is powered by the latest Snapdragon 855 Plus and packs a battery with 4085mAh capacity. Furthermore, the high-end phone is equipped with a Quad HD screen, a whopping 12GB of RAM and an ultra-fast internal storage with UFS 3.0 2-Lane standard. The triple rear camera has a 48MP IMX586 sensor with triple focus (PDAF+LAF+CAF). Full network connectivity for Europa, China and India, NFC, dual GPS and dual stereo speakers are also on board.

The OnePlus 7T Pro McLaren Edition packs an ultra-smooth 90Hz Fluid-AMOLED display for an amazing screen performance at all time. The display filters out harmful blue lights and is HDR10+ certified. Underneath the curved touch panel, which is covered by Corning Gorilla Glass, is a 64bit Qualcomm Snapdragon 855 Plus 7nm octa core CPU with a maximum burst frequency of 2.96 GHz and Qualcomm AI Engine. The McLaren Edition is available with 12GB of memory and 256GB internal storage. An Adreno 640 GPU and Fnatic Gaming mode ensure high performance even for the most demanding games.

In the camera department, the OnePlus 7T Pro McLaren Edition features the same three camera sensors on the rear as the other phone of the OP7 Pro-series. On the front is a motorized pop-up front-camera hidden inside the body to unlock the phone or take amazing selfies. The main camera sensor of the OP7T Pro McLaren Edition has 48-megapixel (IMX586). The main sensor is accompanied by a 16-megapixel wide angle lens with 117° and a third telephoto camera with 8-megapixel and 3x optical zoom. Appropriated for an absolute flagship smartphone, the OnePlus flagship device features Optical Image Stabilization (OIS), and EIS, dual LED flash and a wide range of AI features. PDAF, laser autofocus (LAF) and continuous autofocus (CAF) are supported as well.

The selfie shooter sports a 16-megapixel camera lens (IMX471) with EIS support and it can be used to unlock the smartphone with lightning speed with facial recognition. An under-display fingerprint reader is available too. Videos are recorded with up to 4K and 60fps or in super-slow motion with 1080p and 240fps or 720p with 480fps. The rear triple camera features different modes such as UltraShot, Nightscape, Portrait, Pro Mode, Panorama, HDR, AI Scene Detection, and RAW Image.

The McLaren Edition of the OP7T Pro packs a battery with a slightly increased capacity compared to the OP7 Pro. The McLaren Edition supports OnePlus’ Warp Charge 30T technology with 30W to charge the massive battery with 4,085mAh capacity. Further features which come in handy are gesture control, dual band Wi-Fi (2.4G/5G), Bluetooth 5.0, Near Field Communication (NFC) to use Google Pay and full 4G LTE global connectivity. For positioning and navigation, the mobile phone supports dual GPS (L1+L5), GLONASS, BeiDou and dual Galileo (1+E5a), as well as a compass. Besides the NFC-Chip, the OnePlus 7T Pro McLaren Edition also supports Dolby Atmos and has an Alter Slider. The Android smartphone is running OxygenOS based on Android Q out of the box. 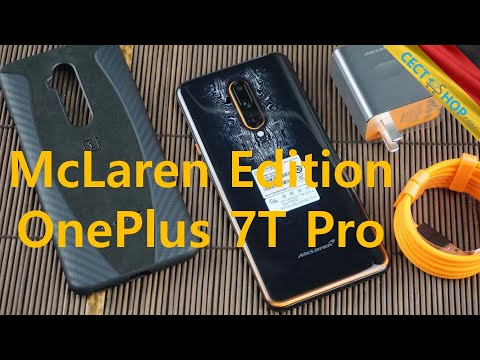