Explore further as you want with the Oukitel WP1big battery rugged mobile phone. The Android phone packs a 5.5-inch screen and is powered by an octa-core MediaTek chipset, paired with 4GB of RAM and 64GB internal storage. Other features include Qi wireless charging, military grade certification, a dual-lens camera and a barometer.

The Oukitel WP1 sports a 5.5-inch display with 1440 x 720 pixels resolution. The handset is rated IP68 and therefore is water-, dust-, and shock-proof. Underneath, a MediaTek MT6763 with eight cores and a maximum burst frequency of 2.0 GHz powers the phone. The processor is supported by 4GB RAM and an ARM Mali G71 GPU. The internal storage of 64GB can be further expanded with a micro SD memory card up to 128GB.

On the rear of the WP1 are two camera sensors. The main sensor from Sony (IMX 135) has 13-megapixel. The 13MP lens is accompanied by a 2-megapixel camera sensor and dual LED flash. The front camera features up to 5-megapixel.

The huge battery of the Oukitel WP1 has a capacity of 5000mAh. The phone can even be charged without any cable with Qi wireless charging technology. The outdoor phone also comes with sensor like gyroscope, geomagnetic and compass sensor, as well as GPS and Glonass. A barometer to measure air pressure and altitude at real time is also on board. The Oukitel WP1 runs Android 8 Oreo out of the box. 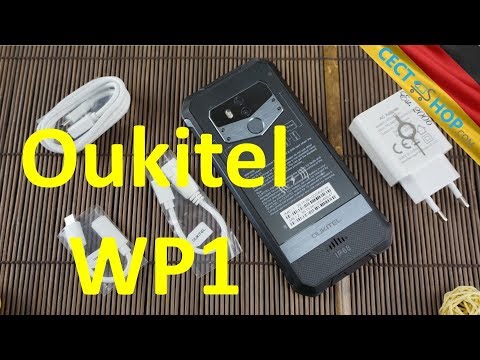