The Oukitel WP2 is a rugged mobile phone with a huge battery of 10.000mAh. The mid-range Android handset offers an octa-core MediaTek SoC backed by 4GB of RAM and 64GB internal storage. Other features include dual band Wi-Fi, NFC, reverse OTG charging capabilities and support of a wide range of 4G LTE frequencies.

The WP2 is equipped with a 6.0-inch display along with an 18:9 aspect ratio resulting in a 1080 x 2160 resolution (full HD+). The phone is rated IP68 and therefore water-, dust-, and shock-proof. In addition, Corning Gorilla Glass 5 protects the touch screen and display against scratches. Under the hood, the rugged phone is powered by a 64bit MediaTek MT6750 octa-core with up to 1.5GHz clock speed. Furthermore, it features 4GB of RAM, 64GB storage and a Mali-T860 MP2 GPU with 520MHz. MicroSD memory card is supported up to 128GB to expand the on-board storage.
For optics, the WP2 packs a dual camera setup on the rear with a 16-megapixel sensor and a secondary 2-megapixel sensor from Samsung. Below the dual camera is an LED with 4 diodes, which gives an excellent bright light for taking pictures at low-light conditions or to lead the way in the dark as flashlight. The front-facing camera features an 8-megapixel lens and can even be used to unlock the phone via facial recognition.
On board the Oukitel WP2 is a high-quality battery from SCUD with a massive capacity of 10000mAh. The rugged device can even be used as a power bank to charge your other devices. Other features of the Android phone include Bluetooth 4.2, dual band Wi-Fi 802.11 a/b/g/n, Dual SIM, side-mounted fingerprint sensor, and OTG reverse charging. The WP2 is running Android 8 Oreo OS.
Order and buy the best phone for outdoor enthusiasts now online at CECT-Shop.com! 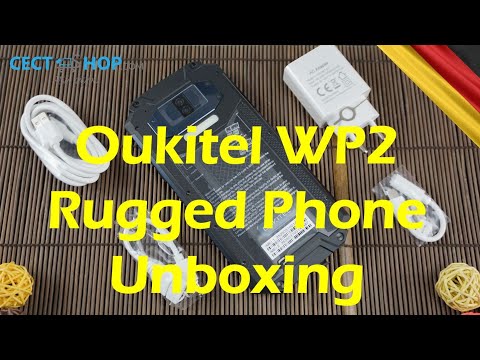