The normal version of the Xiaomi Redmi K20 comes with slightly different specifications than the Pro-version. The new smartphone of the new K series is powered by a Snapdragon 730 chipset, up to 8GB RAM and up to 256GB internal storage. The "K" is to imply the device being a "killer", to keep in line with the "flagship killer" trend. The Redmi K20 has a triple camera setup, a large 4000mAh battery and supports Game Turbo 2.0 mode.

Like the K20 Pro, this model comes with a 6.39-inch FHD+ AMOLED display supporting HDR, an in-display fingerprint reader and additional protection thanks to Corning Gorilla Glass 5. The screen has a brightness up to 600 nit and a 256-step eye protection mode with VDE Low Blu-ray Eye Care certification. The inexpensive Android mobile phone is powered by a powerful 64bit Qualcomm Snapdragon 730 octa-core chipset with up to 2.2GHz burst frequency. The CPU is supported by an Adreno 618 GPU with 610MHz. The Redmi K20 comes in three variants - 6GB+64GB, 6GB+128GB and 8GB+256GB.

The camera sensors are another difference between the Redmi K20 and K20 Pro. The Xiaomi Redmi K20 sports a triple camera supporting PDAF and contrast focus with 48-megapixel main sensor (4-in-1 Pixel) and f/1.75 aperture. The second camera is an 8-megapixel telephoto lens with 2x optical zoom, 1.12μm and f/2.4 aperture. The third camera sensor is a 124.8° super-wide angle lens with 13-megapixel. The front-facing camera is a 20-megapixel pop-up camera with f/2.2 aperture and 0.8μm pixel hidden inside the body of the phone. Videos can be recorded with up to 4K and 30fps or in slow motion with 960 frames. 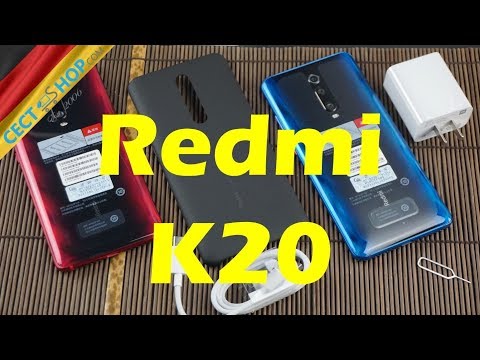