After more than 20 million sold units of the Xiaomi Redmi Note 7 it is time for the next-generation Redmi Note smartphone. The new Xiaomi Redmi Note 8 Pro sports a quad-camera with 64MP main sensor on the rear and is powered by a MediaTek Helio G90T octa-core processor. The Redmi Note 8 Pro is available with up to 8GB of RAM and an expandable flash memory of 256GB. The mid-range phone packs a big battery with 4500mAh capacity and Quick Charge support.

The inexpensive Android mobile phone features a 3D curved glass body with a super high screen-to-body ratio of 91.4%. The large 6.53-inch screen (500 nit) has full HD+ resolution and an aspect ratio of 19.5:9 for being able to operate the smartphone with one hand. The screen is also TÜV Rheinland certified in terms of Low Blue Light emission and supports HDR. In addition, Corning Gorilla Glass 5 protects the touch screen and display against scratches. Underneath the FHD+ screen is a MTK Helio G90T processor powering the Xiaomi Redmi Note 8 Pro cell phone, in combination with the latest ARM Mali-G76 3EEMC4 GPU to play Fortnite and PUBG incredibly smoothly with up to 26% faster results in benchmark tests than direct competitors.

On the back of the pro version of the Redmi Note 8 are a total of four camera sensors located. The 64-megapixel is accompanied by an 8-megapixel super wide-angle lens (120°) and f/2.2 aperture, a 2MP macro lens for taking close up photos, and a 2-megapixel depth of field lens. The most cost-effective Android smartphone available take pictures like an expensive flagship device. As usual, thanks to artificial intelligence you can unlock the smart devices with facial recognition. The front-facing camera of the Xiaomi Redmi Note 8 Pro sports a 20-megapixel sensor with f/2.0 aperture. It supports various AI camera modes perfect for taking mind blowing selfies and video calls.

The Redmi Note 8 Pro is a full-frame liquid-cooled game phone. Therefore, the smartphone is not just great for users with a smaller budget but also for mobile pro gamers. Play alone or online with millions of other players your favorite Android games like Candy Crush, Another Eden, Asphalt 9: Legends, Brawl Stars, Minecraft, Pokemon Go or 3D first-person shooter games like PUBG Mobile and Fortnite. Thanks to Game Turbo 2.0, the Redmi Note 8 Pro supports game performance enhancements, game sound effects, game background noise reduction and much more.

Get ready for the Xiaomi Redmi Note 8 Pro with 64MP quad-camera smartphone – only available at your #1 online store CECT-Shop.com for Xiaomi smartphones, tablets and more. 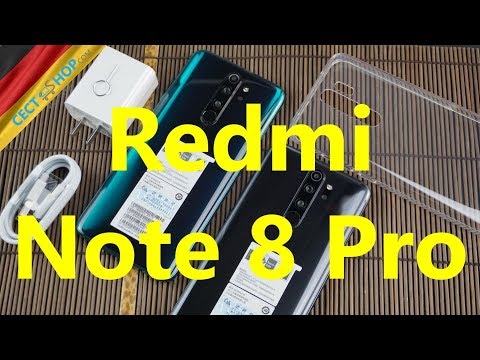