The well-powered Ulefone Power 5 comes with a new Helio P23 chipset coupled with 6GB of RAM. The battery monster has a 13000mAh battery which sports Qi wireless charging as well as Super Fast charging technology. It has a stunning 18:9 AUO screen with 6.0-inch FHD+ resolution. Face ID and fingerprint ID as well as a quad camera setup are further features of the new Ulefone Power 5. In terms of 4G connectivity, it supports all important bands and frequencies for Europe, including band 20 with 800MHz.

The Android smartphone is powered by a 64bit MediaTek MT6763 octa-core processor, paired with a whopping 6GB of LPDDR4X RAM and an advanced Mali-G71 GPU to deliver a seamless and consistent user experience. The 18:9 screen has a super sharp resolution of 2160 x 1080 pixels and a pixel density of 404ppi. The mobile sports 64GB internal storage which can via microSD memory card be further expanded by up to 256GB.

The Ulefone Power 5 comes with a total of four camera sensors. On the rear is a 21MP main sensor (IMX230) and a 5MP secondary snapper that aid in image quality and focusing speeds to create snap crisp, detailed and bright pictures and videos. The dual camera also supports OIS technology, depth-of-field effects and has a dual flash LED. On the front is another dual camera setup with 8MP + 5MP dual camera, f/2.2 aperture and selfie softlight. The selfie camera can also be used to unlock your phone with your face.

No doubt, one of the main features is the huge battery with 13,000mAh capacity which fuels the Power 5 for at least a week after a single charge, or up to 10 days in light use. The phone can be used as a power bank to juice up other devices as well. The dual SIM phone has a fingerprint sensor, a gyroscope, an electronic compass and a LED notification light. Furthermore, it supports Dual Band Wi-Fi, Bluetooth 4.1 and 5V/5A Super Fast Charge as well as 10W wireless charging. The Ulefone Power 5 is running Android 8.1 Oreo out of the box.

Order and buy the 13,000mAh Big Battery Phone now at your No.1 fast and safe online shop - CECT-Shop.com! 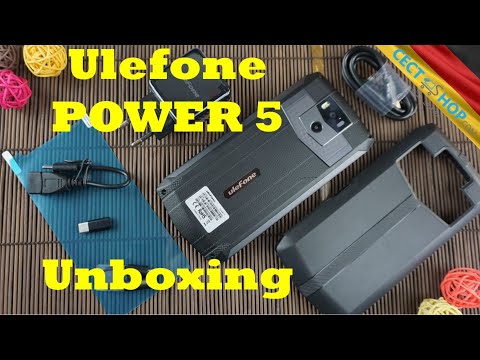