The Umidigi Z2 is available with a unique and revolutionary finish and color. The rear glass panel appears in colors like Twilight (Aurora), Phantom (Blue), Black and Twilight Black. The flagship phone is equipped with four cameras, supports global bands and 18W fast charging technology. The Z2 sports a 6.2-inch notch display with 19:9 aspect ratio and is powered by a Helio P23, coupled with 6GB of RAM and 64GB internal storage. The cell phone runs Stock Android 8.1 Oreo out of the box.

With both front and rear camera equipped with 16-megapixel and 8-megapixel dual camera, you can effortlessly capture the great and fun moments of life. The second 8MP camera is specially designed for shooting in the dark. The camera supports Panorama, Burst mode, Face recognition and real-time filters. Videos are recorded with up to 4K and 30fps. The Umi Z2 supports face unlock too. In addition, a traditional fingerprint sensor is located on the rear to unlock the phone safely.

Umidigi Z2's PE+ technology maximizes charging efficiency by allowing to reach a 9V/2A output. With its help the battery with 3840mAh capacity can be fully charged within 80 minutes. The Chinese smartphone supports 7 network modes and 36 global bands for global use. Further features of the dual SIM phone include 4G VoLTE, OTG, Bluetooth HID, dual band Wi-Fi (802.11 a/b/g/n), GPS and GLONASS. The operating system of the Z2 Twilight smartphone is Stock Android 8.1 Oreo for maximum software support. 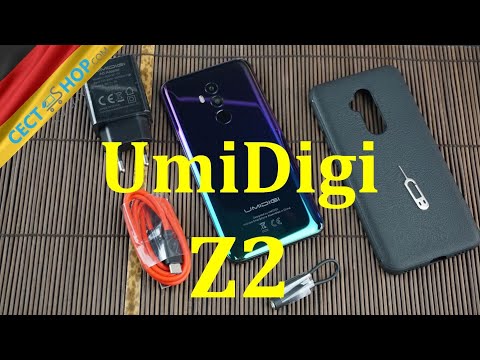