The smartphone company Vivo has released its new Vivo X60 Pro Plus phone. The Vivo X60 Pro+ is powered by the Qualcomm Snapdragon 888 flagship processor. As all other phones of the X60 series, the X60 Pro Plus features a rear camera system co-engineered with German optics company Zeiss. The cell phone comes with 256GB internal storage and the 12GB+256GB variant boosts 12GB+3GB Memory Fusion Technology. On the front is a 6.56 inch 120Hz FullHD+ AMOLED screen and the Vivo X60 Pro+ runs OriginOS based on Android 11 OS.

The display of the Vivo X60 Pro+ measures 6.56 inch with a resolution of 2376 x 1080 pixels. The front camera is placed in the center above the screen. The X60 Pro Plus screen covers 92.7% of the entire front and the phone has an aspect ratio of 19.8:8. The AMOLED screen supports HDR10+ and very accurate one by one color calibration. Like the X60 and X60 Pro, the screen of the Pro+ version features a 120Hz refresh rate and 240Hz touch sampling rate. The X60 Pro+ is fired up by the latest high-end Qualcomm SoC. The state-of-the-art Snapdragon 888 octa-core chipset with a maximum frequency of 2.8GHz, paired with an Adreno 660 GPU and with 12GB of LPDDR5 RAM. The 12GB RAM version has a feature called Memory Fusion Technology that allows you to use 3GB from storage as additional RAM. The X60 Pro+ Android phone comes as 256GB UFS 3.1 storage option.

The other big selling point beside the Snapdragon 888 is the phones camera system. The Vivo X60 Pro+ is equipped with a 48 megapixel IMX598 ultrawide angle camera featuring 4-axis OIS and a secondary ISOCELL GN1 main camera with 50 megapixel. In addition, there is a 32 megapixel portrait camera with a 50mm focal length and an 8 megapixel periscope camera that has OIS, 5x optical zoom and 60x super zoom function. All four rear cameras support autofocus (AF) and video stabilization. You can also record videos in 8K and record slow-motion videos at up to 1080p. Furthermore, the rear camera has Zeiss T* coating which helps with guiding light transmission through the lens of a camera which makes a significant difference in the quality of images taken with the phone. The selfie camera on the front is a 32MP sensor with f/2.45 aperture.

The Vivo X60 Pro+ packs a 4,200mAh battery with 55W fast charging support. Connectivity options include dual 5G, Wi-Fi 6, dual-band Wi-Fi, WLAN Display, Bluetooth 5.2 including aptX HD and a NFC chip. For navigation, you can rely on GPS/A-GPS, Galileo, GLONASS, Navic and Beidou. The Vivo X60 Pro+ runs OriginOS 1.0 based on Android 11 out of the box. Please note, that even if English language (or another language) is available, some parts of the operating system might still be displayed in Chinese language. No launcher change possible. 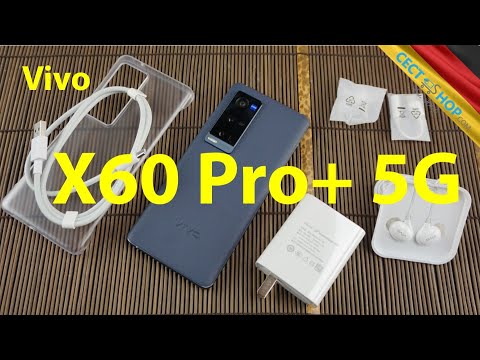