The Xiaomi Black Shark 2 has arrived with a 6.39-inch pressure sensitive Super AMOLED screen. The gaming phone is powered by the latest Snapdragon 855 chipset and comes with up to 12GB RAM. A huge Liquid Cool 3.0 vapor chamber cooling system keeps the high-end processor at a low temperature. Dual AI rear cameras, a 20MP front camera are also on board as well as an under-display fingerprint scanner which is always accessible, even if an accessory is attached on the back.

The display of the Black Shark 2 is a 6.39 inch AMOLED panel with a resolution of 2340 x 1080 and an aspect ratio of 19.5:9. The flagship gaming smartphone comes with a special image processing chip. The Chinese manufacturer calls it a TrueView display, which gives the display of the gamer mobile phone true colors with a series of modes that are effective depending on lighting conditions and ambient color tone. These include Day Light View (DLV), Night View, Reading Mode. In addition, the Black Shark 2's screen has a feature called Magic Press, which allows you to adjust the touch controls on the screen. Magic Press also lets you customize the pressure sensitivity of the two sides of the screen. In addition, there are also features like Full DC dimming, MEMC intelligent motion, Super HDR, and an eye protection mode.

In the camera department there is a 48-megapixel 0.8μm primary camera with f/1.75 aperture paired with a 12-megapixel f/2.2 telephoto lens with 2x optical zoom on the rear. On the front is a 20-megapixel f/2.0 1.0μm sensor covered with a 5P lens. The camera can record in 4K at 30fps, record slow-motion videos in 720p at 240fps and in 1080p at 120fps. The Black Shark 2 has an in-display fingerprint sensor. It also has Bluetooth 5.0, and a USB Type-C port. Under its hood is a 4000mAh battery with support for 27W fast charging. It has stereo speakers, triple-microphones for stereo recording, and the Black Shark 2 uses artificial intelligence (AI) to reduce background noise. 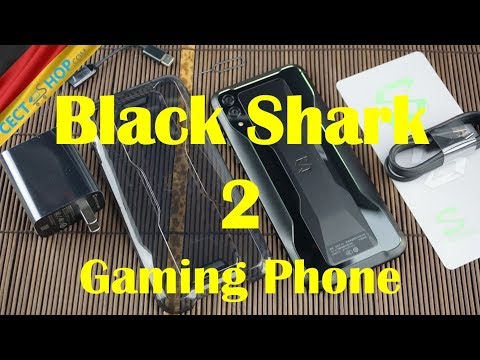