The Xiaomi Black Shark 4 gaming phone has a 6.67-inch screen with FHD+ resolution, 144Hz refresh rates and a snappy 720Hz touch sampling rate. The latter is extremely useful for quick reactions in games and a feature no other phone has so far. The Black Shark 4 is powered by a Snapdragon 870 SoC, up to 12GB of RAM and it supports 120W Hyper Charge, which will charge the gaming phone in just under 15 minutes.

The Samsung Super AMOLED screen of the Black Shark 4 sports a 144Hz refresh rate and 720Hz touch-sampling rate for extremely precise tracking when playing online games. The AMOLED is made of energy-efficient E4 material and has a size of 6.67-inches. The Black Shark 4 gaming phone is powered by a 64bit Qualcomm Snapdragon 870 octa-core processor with a maximum clock speed of 3.2GHz. The processor is paired with an Adreno 650 GPU and and up to 12GB DDR5 of RAM. For storing all your 3D games, photos and videos the Black Shark 4 gaming phone offers 128GB or 256GB of internal storage.

On the back of the Xiaomi Black Shark 4 is a triple camera setup with 48 megapixel main sensor with f/1.8 aperture, a secondary 8-megapixel lens with f/2.25 aperture and a third 5-megapixel macro lens with an aperture of f/2.2. Videos can be recorded with 4K and up to 60fps. The punch hole display houses the 20-megapixel 0.8µm selfie camera with fixed focus and f/2.0 aperture supporting facial recognition to unlock the Android gaming phone.

The Black Shark 4 has a large built-in battery with 4500mAh capacity supporting up to 120W charging speeds. In terms of connectivity, the Xiaomi gaming phone supports Bluetooth 5.2, including aptX, aptX HD, aptX Adaptive and LDAC. Other wireless connections include Wi-Fi Display, Wi-Fi Direct and Wi-Fi 6, as well as dual 5G and 4G LTE including band 20 (B20) with 800MHz. For navigation GPS/AGPS, Glonass, Beidou, QZSS and European Galileo is available. The Xiaomi Black Shark 4 is running JoyUI 13, based on Android 11 operating system. 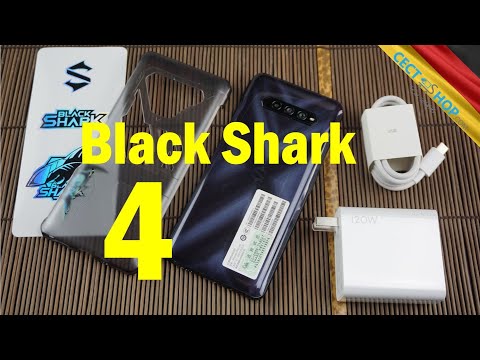