After Xiaomi has acquired Meitu, the Xiaomi CC9-series phones including the Mi CC9, Mi CC9e and Mi CC9 Meitu Edition are the first devices rolling out with Meitu technology on board. The Xiaomi CC9 sports a Super AMOLED waterdrop notch display and is powered by a Snapdragon 710 SoC. The phone features a dual-glass design with metal frame and weights only 179g. The Mi CC9 comes with 6GB RAM and 64GB or 128GB UFS2.1 on-board storage. It packs a battery with 4030mAh capacity and supports QC4 fast charging. NFC, an infrared port and a headphone jack are available too.

Like the Redmi K20 and K20 Pro, the new Xiaomi CC9 comes with a 6.39-inch FHD+ Super AMOLED display, an under-display fingerprint reader and an additional layer of Corning Gorilla Glass 5 for better protection. The display has a brightness of up to 600nit and supports a 256-step eye protection mode as well as HDR, Sun Screen 2.0 and Full DC dimming. Under the hood, the affordable triple-camera smartphone is powered by a 64bit Qualcomm Snapdragon 710 octa-core processor with up to 2.2GHz burst frequency. The chipset is supported by an Adreno 616 GPU and Qualcomm AI Engine. The Xiaomi Mi CC9 comes in two variants - 6GB+64GB and 6GB+128GB with super-fast UFS2.1 internal storage. The internal storage can even be further expanded up to 384GB.

On the back of the Xiaomi cell phone is a triple camera setup responsible for taking videos and photos. The main camera is a 48-megapixel f/1.8 sensor from Sony, accompanied by an 8-megapixel super wide-angle lens and a 2-megapixel depth sensor unit. The rear camera supports several AI modes and videos in 4K with 30fps or 960fps slow motion recordings including EIS video stabilization. The 4-in-1 front-facing camera with 32-megapixel comes with 1.6μm large pixels and f/2.0 aperture. The selfie-shooter has AI capabilities for skin beautification and also Xiaomi's own augmented reality emoji functionality called "Mimoji" which is very similar to Apple's Memojis or Samsung's AREmojis.

The Xiaomi CC9 features a 4030mAh battery with 18W fast charging support. Other features of the smartphone include LTE, WiFi, NFC, Hi-Res audio, Bluetooth 5.0 and a 3.5 mm headphone jack. The operating system is MIUI based on Android 9 Pie. The UI offers features like Game Turbo 2.0, color AOD display or dark mode.

Colorful and Creative: Buy Xiaomi CC9 with triple camera now online at CECT-Shop.com – since 2006 your #1 online shop for Xiaomi smartphones and more! 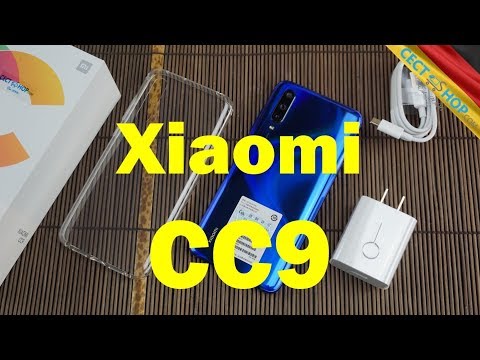