The Xiaomi Redmi K30 Ultra is powered by the Dimensity 1000+ SoC which ranks second in AnTuTu’s Android smartphone SoC chart right behind the Qualcomm Snapdragon 865 chipset. The Redmi K30 Ultra comes with up to 512GB internal storage and can be seen as the true successor of the Redmi K20 Pro Exclusive Edition. The Xiaomi phone packs a 120Hz 6.67-inch pop-up full screen made with Samsung E3 material. On the rear is a quad camera setup with 64MP 4-in-1 main camera and the dual SIM cell phone supports 5G and Wi-Fi 6 connectivity and packs a large 4500mAh battery.

The most significant differences between the new Redmi K30 Ultra and the K30 Pro Zoom Edition are the processor and screen features. The 120 Hertz screen supports adaptive brightness with a  360° ambient light sensor. The 6.67-inch screen has a resolution of 1080 x 2400 pixels, a 240Hz touch sampling rate and supports HDR 10+ high dynamic range video playback, as well as 100% coverage of DCI-P3 and sRGB color gamut. In addition, the Redmi K30 Ultra is equipped with a new generation of under-display fingerprint sensor. Under the hood, the Redmi K30 Ultra is powered by a MediaTek Dimensity 1000+ octa-core chipset with 4x A77 2.6GHz and 4x A55 2.0GHz. The processor is combined with a Mali-G77 GPU and up to 8GB of RAM. In terms of internal storage, the Redmi K30 Ultra offers either 128GB, 256GB or a whopping 512GB flash memory to save all your precious photos and videos or 3D games.

At the back of the phone is a quad-camera setup featuring a 64-megapixel Sony 4-in-1 super clear main camera. The primary camera is accompanied by a 119° super wide-angle lens with 13-megapixel, a 2-in-1 telephoto macro lens with 5MP and a fourth depth of field sensor with 2MP and 1.75μm large pixels. For users who value a true full screen display without a notch or punch hole camera, the Redmi K30 Ultra is definitely the right choice. The Android phone sports a pop-up selfie camera with 20MP which is hidden away while not being used. The main camera records videos with up to 4K@30fps and slow-motion shoots with up to 960fps. 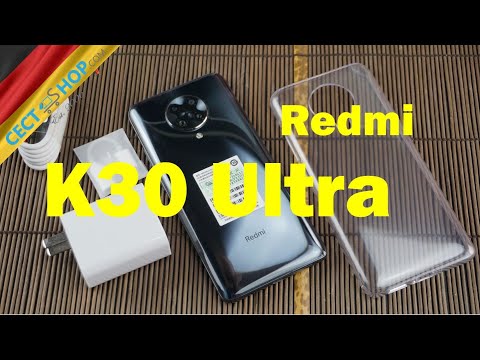