Huawei’s Honor sub-brand Honor 9X series phones are the first devices with a pop-up selfie camera. The Honor 9X and 9X Pro are both similar devices when it comes to weight, size and the built-in chipset powering the two mid-range phones. Both variants of the Honor X9 Pro have 8GB of RAM, paired with a Mali G52 graphics processor. The sports a triple rear camera with 48MP+8MP+2MP cameras. The smartphone packs a large battery with 4000 mAh capacity and supports dual 4G LTE. On the rear, the Phantom Purple model comes with a cool gradient finish with X pattern.

In terms of display size and resolution, the Honor 9X and 9X Pro feature the same 6.59-inch full HD+ screen with 2340 x 1080 pixel and 391ppi. The display is also certified by TÜV Rheinland from Germany in terms of eye protection. The Honor 9X Pro is powered by Huawei’s second 7nm SoC. The Kirin 810 octa-core processor features 2x Cortex A76 with 2.27GHz and 6x Cortex A55 with 1.88GHz. The smartphone is equipped with a Mali G52 GPU and 8GB RAM and up to 256 GB of expandable internal storage. Both models support up to 512GB expansion with a microSD memory card.

The Honor 9X Pro sports a 4,000mAh battery with Huawei Fast Charge support via USB-C port. The Android cell phones connectivity options include Wi-Fi 802.11ac, Bluetooth 5.0, a 3.5mm audio jack, and more. There is also a side-mounted fingerprint sensor onboard to unlock the phone. The Honor 9X Pro is running EMUI 9 based on Android 9 Pie OS out of the box. Please note, that even if English language (or another language) is available, some parts of the operating system might still be displayed in Chinese language. No launcher change possible.

Order and buy the mid-range Huawei Honor 9X Pro smartphone at the best online store for China smartphones from Huawei and Honor – CECT-Shop.com. 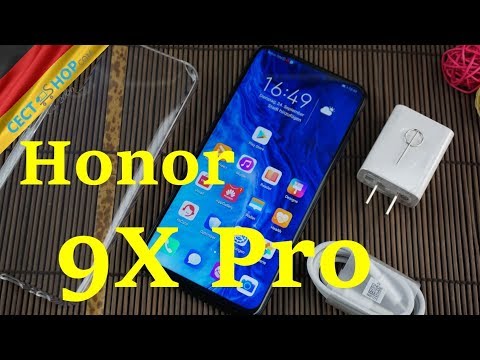