18 reviews
Write a review
Please note: Apps on the phone will be shown in the selected language. But even if your desired language is supported by RedMagic OS 2.0 it is possible that it is not or not fully translated into any language besides English and Chinese.
Including ✓ free AC Power Adapter ✓ free U Touch Silicone Stand & ✓ free Microfiber Cloth
Show Supported Mobile Operators
Not available
$513.54
6+64GB
6+128GB
8+128GB
12+256GB
Black
Red
Red Blue Gradient
Battlefield Camouflage
Original ROM
Custom ROM (ENG/ESP/FRE/RUS. etc.) - no OTA Updates & with Google Play Store
Loading model variant...
The following variant is unavailable:
Payment methods:

Nubia has been contributing to the gaming smartphone trend in the past and the Red Magic 3 is the latest device of their gaming phone lineup. The Nubia Red Magic 3 has a 6.65-inch AMOLED display and is powered by a high-end Snapdragon 855 chipset. The phone comes with 6GB, 8GB or 12GB of RAM and up to 256GB flash storage. Against overheating, the Red Magic 3 is equipped with a small fan that can spin up to 14,000 rpm. The gaming phone comes with IP55 certification and has stereo front-facing speakers providing a cinematic soundscape thanks to DTS XUltra, DTS7.1 and other 3D sound technologies. Connectivity-wise, the Red Magic 3 supports dual 4G LTE with all important global bands. In Battlefield Camouflage and Red Blue Gradient it is only available with 12GB+256GB.

On the visual side, the 6.65-inch full HD+ AMOLED display features a 90Hz refresh rate and support for features like DC Dimming and HDR. On the rear is a RGB lighting strip, which can be customized with over 16.8 Million color choices. The gaming phone also features two touch-sensitive shoulder buttons for a great gaming experience. In addition, the rear fingerprint scanner can be mapped to different on-screen actions, giving you three hardware buttons to use for gameplay. The phone also features a physical switch key to start the “Red Magic Game Space 2.0” feature for quick access to game-focused functions. Accessories such as a dock and a gamepad add-on are also available (not included). Nubia’s third gaming smartphone is powered by a 64bit Qualcomm Snapdragon 855 chipset with up to 2.84GHz burst frequency. The SoC is supported by up to 12GB LPDDR4X RAM and a super-fast internal storage up to 256GB UFS 2.1.

As for cameras, the Nubia Red Magic 3 comes with a 48-megapixel f/1.7 main lens powered by a Sony IMX586 sensor, including dual tone LED flash, and PDAF focus. On the front is a 16-megapixel f/2.0 selfie shooter with fixed focus and 2.0µm pixel size. The rear camera can record videos up to 8K and has a super slow motion mode up to 1920 fps.

The world's first fan-cooled gaming smartphone comes with a massive built-in battery with 5000mAh capacity. The battery features 30W quick charging which allows you an hour of gaming from a 10 minutes charge. The front-facing stereo speakers work with DTS:X surround sound, and the triple-mic noise cancellation is perfect for those who like to stream their gameplay. In addition, there is a 3.5mm headphone jack, dual band Wi-Fi and dual 4G LTE. In combination with the state-of-the-art liquid cooling technology and an internal turbo fan you are more than ready to play titles like Forsaken World, Heroes of the Multiverse, Vainglory, Peak Tank and more. The Nubia gaming phone runs Nubia Red Magic OS, based on Android 9 Pie. Please note: Apps on the phone will be shown in the selected language. But even if your desired language is supported RedMagic OS if not fully translated into any language besides English and Chinese. 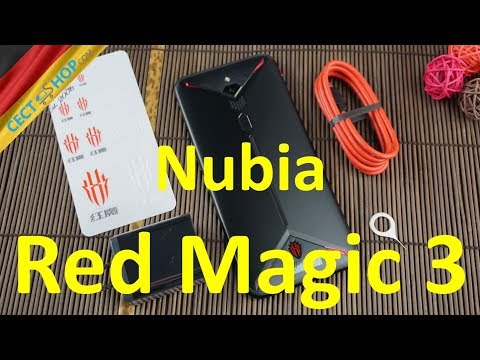