The OnePlus 7 Pro is the main flagship phone of the OnePlus 7 series. The Android phone is ready to compete with the Samsung Galaxy S10, LG G8 ThinQ, V50 ThinQ 5G, or Sony Xperia 1. The high-end phone is equipped with a Quad HD screen, up to 12GB of RAM and a Snapdragon 855 chipset. The OP7 Pro is the first device of the manufacturer with triple rear camera setup and a pop-up selfie camera.

The OnePlus 7 Pro sports a so called Fluid-AMOLED display with 90Hz to deliver smooth screen performance at all time. The improved display filters out harmful blue lights and is HDR10+ certified. Underneath the touch panel, which is covered by Corning Gorilla Glass, is a 64bit Qualcomm Snapdragon 855 7nm SoC with eight cores and a burst frequency up to 2.84 GHz. The smartphone is available in different variants and colors with up to 12GB of memory and 256GB flash storage.

In the camera department, the OnePlus 7 Pro features three camera sensors on the rear and a motorized pop-up front-camera as seen on devices like the OnePlus 7 or Vivo X27 Pro. The main sensor of the OP7 Pro has 48-megapixel (IMX586) and is accompanied by a 16-megapixel wide angle lens and a third telephoto camera with 8-megapixel and 3x optical zoom. Appropriated for a flagship phone, the OnePlus mobile phone comes with Optical Image Stabilization (OIS), and EIS, dual LED flash and a wide range of AI features. PDAF, laser autofocus (LAF) and continuous autofocus (CAF) are supported as well. The selfie shooter is hidden inside the phone’s body. The front-facing camera sports a 16-megapixel camera sensor (IMX471) with EIS and it can be used to unlock the smartphone with lightning speed. An under-display fingerprint sensor is available too. Videos are recorded with up to 4K and 60 fps or in super slow motion with 1080p and 240fps or 720p with 480fps. The rear camera features UltraShot, Nightscape, Studio Lighting, Portrait, Pro Mode, Panorama, HDR, AI Scene Detection, and RAW Image.

The OnePlus 7 Pro supports OnePlus’ Warp Charge 30 technology with 30W to charge the massive built-in battery with 4,000mAh capacity. Other features which come in handy are gesture control, dual band Wi-Fi (2.4G/5G), Bluetooth 5.0, Near Field Communication (NFC) to use Android Pay and full 4G global connectivity. For positioning dual GPS (L1+L5), GLONASS, BeiDou and Galileo, as well as a compass, are available for navigation. IP rating is not available, but the premium phone is water resistant. Note that OnePlus makes no guarantees regarding water/liquid resistance and water/liquid damage is not covered under product warranty. The OnePlus 7 Pro is running OxygenOS based on Android 10 (supports OTA updates) out of the box.

Go beyond speed: Order and buy OnePlus 7 Pro flagship online at the best online store for Android smartphones since 2006 - CECT-Shop.com. 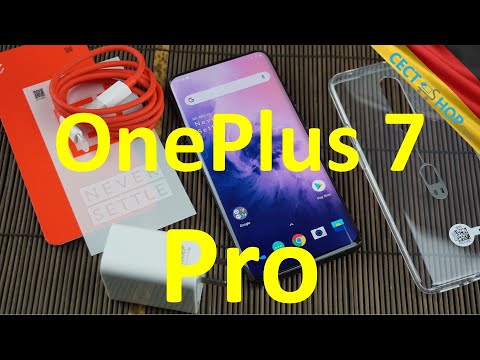