At the end of each year Huawei is releasing the new devices of its Honor V-series. The new Huawei Honor V30 is powered by Huawei’s top of the line Kirin 990 SoC, and features a pill-shaped punch-hole selfie camera design. The Huawei Honor V30 has a triple camera setup on the rear and features a 4200mAh battery supporting 40W fast charging.

The Huawei Honor View 30 comes with a FullScreen display with 6.57-inch and a resolution of 1080 x 2400 pixels and a screen-to-body ratio of 91.41%. The upper mid-range mobile phone is powered by the same processor like the Mate 30 Pro. The octa-core Kirin 990 chipset is paired with a Mali G76 GPU and up to 8GB of memory. The Honor Vera 30 sports an internal storage capacity of 128GB.

On the back of the Huawei Honor V30 are a total of three camera sensors, including a 40-megapixel Sony IMX600 main sensor and laser focus, PDAF and contrast focus. Additional cameras include an 8-megapixel telephoto lens with 3x optical zoom (f/2.4) and OIS and another 8-megapixel ultrawide camera with f/2.4 aperture. On the front, there is a dual camera located inside the punch-hole. The Honor V30 has a 32-megapixel main selfie camera with Super Night mode and f/2.0 aperture supporting fixed focal length (FFL). The second shooter is an 8MP ultrawide camera. The AI front camera supports facial recognition to safely unlock your device.

The Honor V30 is equipped with a 4200mAh battery with 40W Huawei SuperCharge support. Additional features and connectivity options include VoWiFi, VoLTE and ViLTE as well as dual band Wi-Fi, Bluetooth 5.1 supporting BLE, SBC, AAC. For navigation and positioning dual GPS (L1+L5), BeiDou (E1+E5a) and QZSS (L1+L5) are on board as well as AGPS and Glonass. The Huawei Honor V30 comes with OTG support and a NFC chip. On the software side, the China version of the Honor V30 ships with Magic UI 3.0 based on Android 10. 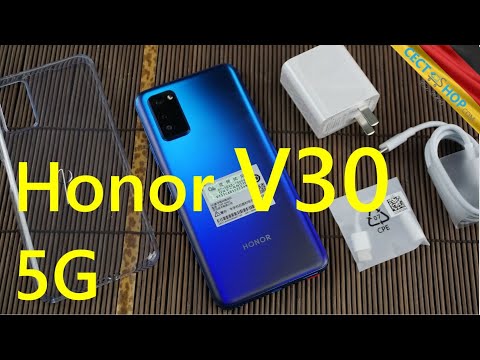