The massive Huawei Mate 20 X phablet packs a huge 7.2-inch OLED display perfect to game PUBG or Fortnite or to watch Netflix. The Android phablet is equipped with the first 7nm Android processor - the cutting-edge Kirin 980 chipset including a brand new NPU. The waterdrop notch screen has a resolution of 2244 x 1080 pixels with 87.83% screen-to-body ratio. The phone sports the same triple camera setup as the Mate 20 Pro with three Leica lenses on the rear – a 40MP wide-angle lens, a 20MP ultra wide-angle lens, and an 8MP telephoto lens. It packs a huge 5,000mAh battery with a standby time up to 21 days, supporting Huawei SuperCharge technology.

The Mate 20X is the largest of the three Mate 20 series phones. The phablet is equipped with a huge 7.2-inch HDR display. Underneath, the Huawei Mate 20 X is powered by the new Kirin 980 SoC. The Kirin 980 consists of four cores that handle low-intensity tasks (Cortex A55 1.8GHz), two middle cores for more demanding tasks (Cortex A76 1.92GHz), and two advanced cores (Cortex A76 2.6GHz) that will handle the most demanding apps and games. This new processor boosts speed by 20 percent and power efficiency by 40 percent compared to the older Kirin 970.

The chipset works together with a dual neural processing unit (NPU) for tremendous improvements in terms of real life image processing, and object recognition and segmentation. GPU is a Mali G76 with 720MHz. The Mate 20 X is available in two variants with 6+128GB or a whopping 8 GB of RAM and 256 GB on-board storage. The internal storage can be further expanded with a Huawei NM Card which was specifically designed for the new Huawei flagship phones.

The Samsung Galaxy Note 9-rival has three cameras and a LED flash set out in a square on the back. The triple-camera system is comprised of a 40-megapixel wide-angle lens (f/1.8), a 16-megapixel super wide-angle lens (f/2.2), and an 8-megapixel telephoto dual zoom lens (f/2.4). The camera supports various auto focus modes (laser focus, phase focus, contrast focus) and AIS anti-shake. On the front, the device sports a 24-megapixel front-facing camera which is perfect for selfies, video calls and to unlock the smartphone with face recognition. Like the Mate 20, the Huawei Mate 20 X also packs a rear-mounted fingerprint sensor to safely unlock the mobile.

The Huawei Mate 20 X packs in a huge 5,000mAh battery which offers up to 23 hours video playback, which it claims is nine hours more than iPhone XS Max and up to three hours more gaming time versus its competitors. The battery is charged with a 22.5W charger and Huawei’s SuperCharge technology. For comparison, the iPhone XS ships only with a 5W charger. Other features and connectivity include a 3.5mm headphone jack compatible with Type-C digital headphones, dual GPS, dual Galileo, dual QZSS and dual band Wi-Fi 802.11 a/b/g/n/ac. Furthermore, a Near Field Communication chip (NFC) for Android Pay and Google Pay is on board, as well as dual 4G VoLTE and Bluetooth 5.0 support. The Huawei Mate 20 X is also IP53 rated, which means its water and dust resistant. The large smartphone runs with EMUI 9, based on Android 9 Pie. 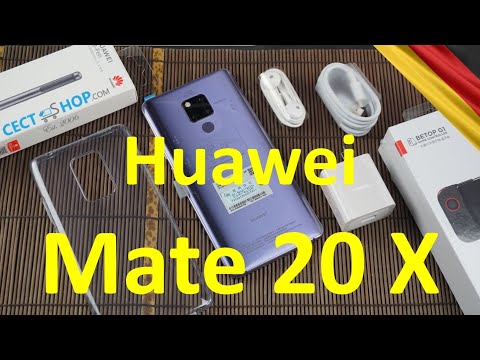