The Meizu 17 Pro 5G smart phone is the latest high-end device from Meizu. The premium phone is equipped with a 90Hz Super AMOLED display and powered by a Qualcomm Snapdragon 865 processor including a X55 modem for super-fast mSmart 5G support. On the back of the Meizu 17 Pro is a camera-bar with a total of four camera sensors, including a 64-megapixel Sony IMX686 main camera, and a LED flash ring located in the middle. The Android smartphone has a large full-screen with 6.6-inch including an integrated punch-hole front camera. The Meizu 17 Pro comes with other upper class features like mEngine 3.0 360° haptic motor, Super mTouch to unlock the cell phone, stereo speakers, and 27W Qi Wireless charging support.

On the front, the Meizu 17 Pro sports a brilliant Samsung Super AMOLED display (700nit) with 90 Hertz refresh rate and 180Hz touch sampling rate. The screen covers 92.2% of the entire front and has an under-display fingerprint reader included. Under the hood, a 64bit Qualcomm Snapdragon 865 octa-core chipset with up to 2.84GHz burst frequency is responsible to power the phone. The SoC is supported by an Adreno 650 GPU and LPDDR5 memory. The Meizu 17 Pro is available with 8GB+128GB or 12GB+256GB storage. The internal storage comes with UFS 3.1 standard.

In terms of camera, Meizu is one of the only phone manufacturer who is taking a different approach and doesn’t follow the mainstream design. The Meizu 17 Pro packs a total of five cameras and on the rear is a camera bar with quad-camera setup. The 64-megapixel Sony IMX686 main sensor is accompanied by an 8-megapixel telephoto lens (OV 08A10) with f/2.4 aperture, a third 32-megapixel (Sony IMX616) camera sensor for taking photos with an ultra-wide angle with 129° or from a macro perspective as close as 3cm. The fourth sensor is a Time-of-Flight lens (Samsung 33D) with f/1.4. The main rear camera takes stunning shots and supports Super Night View, Scene recognition mode and Smart HDR and can record ultra clear videos with up to 4K@60fps or slow-motion videos with 480 frames. As usual, Meizu has its premium line-up equipped with a LED flash ring with 5 LEDs. On the front, the 20MP selfie shooter comes integrated into the screen. The front camera has an aperture of f/2.2 and supports different modes like AI Beauty, Front Super Night View, Backlight Mode or can simply be used to unlock the phone by Face recognition.

The Meizu 17 Pro mobile phone packs a big battery with 4,500 mAh capacity. The Meizu 17 Pro unites Super wireless mCharge and Super mCharge with up to 30W. Connectivity options include 5G, 4G LTE, dual band Wi-Fi (802.11a/b/g/n/ac/ax) and Wi-Fi 6, as well as NFC (Near Field Communication). For navigation and positioning the Meizu 17 Pro has dual GPS on board. In terms of operating system and user interface, the Meizu 17 Pro is running Flyme 8, with the new OneMind 4.0 AI Engine, which is 30% better than its predecessor. In combination with the Super AMOLED screen and the Android 10 Dark Mode you can also get a better and longer battery usage time out of the Meizu 17 Pro.

The Android flagship phone Meizu 17 Pro (M091Q) of the year is available now at CECT-Shop.com. Your trusted China smartphone shop since 2006! 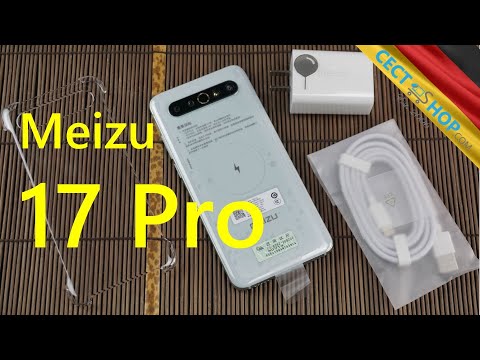