The OnePlus 7T takes the best features from the OnePlus 7 Pro, such as the 90Hz display and its triple rear camera setup, but to a lower price. The OnePlus 7T is the best smartphone value of 2019! The Android device is powered by a Snapdragon 855 Plus, 8GB RAM and up to 256GB UFS 3.0 storage. On the back is a 48MP (IMX 586) main camera and underneath a 3,800mAh battery supporting Warp Charge 30T. The phone supports all important 4G LTE bands and frequencies and comes with a NFC chip for mobile payments.

On the front, the OnePlus 7T looks similar to the OnePlus 7, but wildly different on the back. The display has a size of 6.55-inch with a long 20:9 screen-to-body ratio. The screen has a 90Hz refresh rate which helps to make Android OS a much better experience. The Fluid AMOLED screen comes with Full HD+ resolution and it is also HDR10 and HDR+ compatible, meaning it can properly display content with more color and contrast. The built-in Snapdragon 855 Plus octa-core SoC offers 15% faster graphics rendering than the SD855. The OP7T is available with 8GB+128GB and 8GB+256GB storage.

On the rear, the OnePlus 7T camera module is shaped in a circular design, similar to the Huawei Mate 30 Pro. The main 48-megapixel camera has optical image stabilization, and is joined by a 12-megapixel 2x telephoto camera (S5K3M5) and a 16-megapixel ultrawide camera (IMX481). This combination allows you to take photos with up to 10x digital zoom. The 16-megapixel fixed focus selfie camera is located in the teardrop notch with f/2.0 aperture and EIS support. The in-display fingerprint scanner is even quicker and more accurate than it was on the OnePlus 7 Pro.

OnePlus bumped the capacity of the battery to 3,800mAh versus 3,700mAh on the OnePlus 7. The OnePlus 7T supports 30W Warp Charge 30T which is 23% faster and can charge the phone from 0 to 100% in 70 minutes. Connectivity options include dual band Wi-Fi, full 4G TLE support, USB 3.1GEN1 Type-C port, and if you are using Bluetooth, the OnePlus 7T supports Bluetooth 5.0, aptX, aptX HD, LDAC and AAC. It comes with Dolby Atmos and dual stereo speakers, an Alert Slider and dual GPS. A NFC chip is also on board for using transportation cards or Google Pay. The Android smartphone is running OxygenOS based on Android 10 out of the box.

Order and buy OnePlus 7T now online at the best store for Android smartphones since 2006 - CECT-Shop.com. 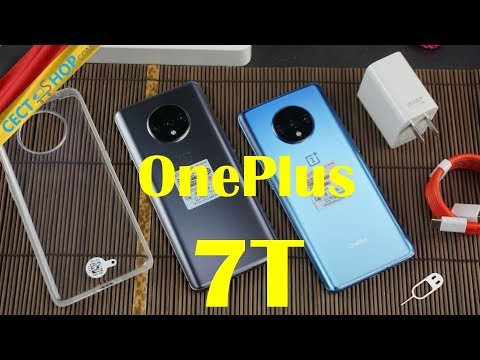